Razer has managed to do something highly unusual: the company’s released a tablet that stands out from the crowd. The Razer Edge is a tablet aimed at PC gamers, and it features the hardware you’d expect from a mid-level gaming computer… but in a portable package.

Earlier this month Razer started taking pre-orders for its gaming tablet, and within a few weeks the company had to stop taking orders to catch up with demand. Not bad for a tablet that costs twice as much as an entry-level iPad.

The company plans to start shipping tablets to customers soon, and the first reviews are in. For the most part, it sounds like the Edge delivers on its promise to make PC gaming portable. But there are a few caveats. 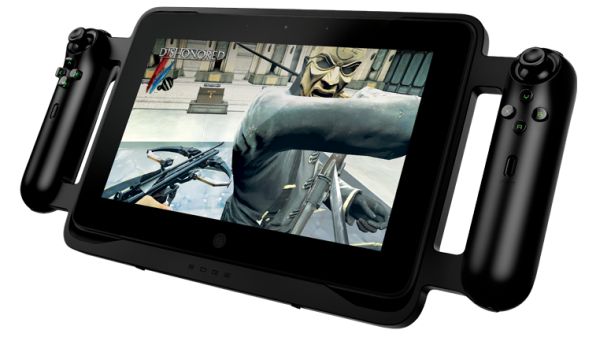 First, the Razer Edge doesn’t come cheap. For $999 you can get a model with Windows 8, a 64GB solid state disk, 4GB of RAM, an Intel Core i5 Ivy Bridge processor and NVIDIA GeForce GT640M graphics. But if you want more storage or a faster processor, the Razer Edge Pro starts at $1299.

That’s a lot of money for a tablet with a 10.1 inch, 1366 x 768 pixel display. But it’s quite probably the most powerful tablet on the market, at least in terms of graphics performance. And while it doesn’t have a 1080p display, that might actually be a good thing, since the NVIDIA graphics card doesn’t have to work too hard to push pixels to the tablet’s screen.

The price climbs even higher if you want optional accessories such as a keyboard, docking station or the detachable gamepad controllers. The gamepad accessory (which can also house an optional extended battery), costs $250. And that’s an accessory you’re almost certainly going to want, because why buy a PC gaming tablet if you’re not going to use the best available gamepad to control it?

Second, at about 2 pounds, the Razer Edge is heavier than your typical 10 inch tablet. But you can use the detachable gamepad that latches onto the sides to grip the device comfortably with two hands, so it might not feel quite so heavy.

But the third problem is probably may pose the biggest challenge — by using an Intel Ivy Bridge CPU and NVIDIA GeForce graphics, Razer made the Edge a bit of a power hog when compared with most other tablets. Even with a bulky 41 Whr battery, the Edge tops out at just 2 to 3 hours of run time while playing games. It should last longer if you’re using it to surf the web or perform other lighter duty tasks.

The good news is that if battery life, size, and price aren’t important, the Razer Edge is apparently an excellent machine. Most reviewers seem very impressed with its performance. Most importantly, it can handle pretty much any modern video game you can throw at it (although you might need to lower the graphics settings on some titles).

Here are some of the first reviews of the Razer Edge Pro (If you’re only going to read one, and have some spare time on your hands, I highly recommend AnandTech’s lengthy review):

Ultimately, the consensus seems to be that the Edge is a tablet designed for serious gamers who want to be able to take their games with them… and who are willing to pay a premium price for the experience it offers.