Gaming hardware company Razer has been making game Razer Kishi game controllers for Android phones and small tablets for the past few years. Now the company is introducing its own Android tablet designed to work with Razer’s new Kishi Pro detachable controllers.

The Razer Edge is an Android gaming tablet with a 6.8 inch, 2400 x 1800 pixel 144 Hz AMOLED display, a Qualcomm Snapdragon G3X Gen 1 processor. It’s expected to ship in January, 2023 and will be available in two versions: there’s a WiFi-only model priced at $400 and a 5G model that will be available exclusively from Verizon, which will announce pricing separately.

When Verizon released the first teaser for the Razer Edge 5G in September, it wasn’t clear that we were looking at a tablet with detachable controllers. So it seemed safe to assume that the device would be similar to the hardware development kit Qualcomm and Razer introduced last year.

But instead, it seems like the new Razer Edge is more of a spiritual successor to the original Razer Edge, a 10 inch Windows gaming tablet with detachable controllers that was released in 2013 but discontinued the following year.

The device will also likely draw some obvious comparisons with the Nintendo Switch, another tablet with detachable controllers. But while Nintendo’s tablet is a console running Nintendo’s proprietary software, the new Razer Edge is a device that ships with Android 12 software. It should be able to run thousands of Android games without breaking a sweat, but Razer notes it also supports game streaming platforms like Xbox cloud gaming, NVIDIA GeForce Now, and Amazon Luna.

And while you could theoretically slap a Razer Kishi v2 game controller on any decent Android phone for a similar gaming experience, Razer says there are few things that set its new mobile game system apart:

Razer says the Kishi Pro controller also has “smooth analog triggers” and microswitch buttons. And while the Edge tablet is also compatible with the Razer Kishi v2 controller if you wanted to use it for some reason. But the company doesn’t plan to sell the tablet as a standalone device at launch: the only way to buy it will be to purchase a tablet + Kishi Pro controller bundle.

Other Razer Edge features include a webcam, support for WiFi 6E, and 5G ultra wideband support (if you opt for the Verizon model).

Razer isn’t committing to regular OS or security updates, but the company says it does plan to offer over-the-air software updates to bring improvements and new features to its own Razer Edge software experience. 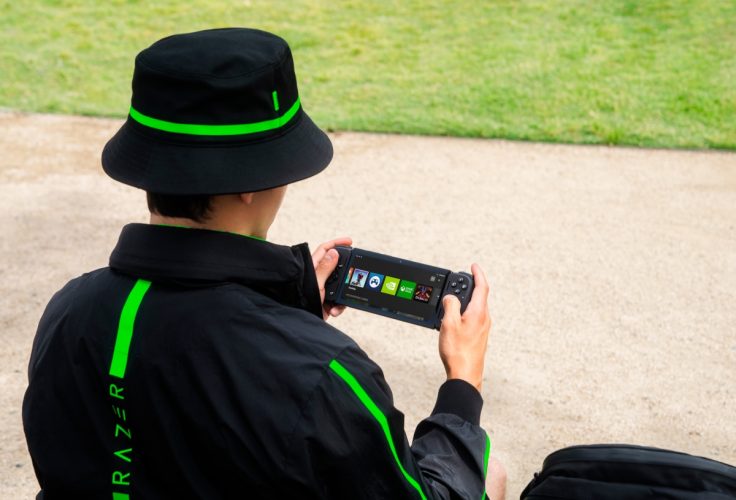 While the Razer Edge isn’t available for purchase yet, you can pay a $5 deposit to reserve your place in line and then pay the balance when the device goes on sale in the coming months.