Gaming accessory and PC maker Razer launched a 2.75 pound gaming laptop in January called the Razer Blade Stealth. Actually, the laptop itself is a pretty decent computer, but it doesn’t really have the power for heavy-duty gaming… unless you also buy a Razer Core graphics dock, which lets you use the thin and light notebook with a desktop-class graphics card.

The only problem? While the Razer Blade Stealth has been on sale since January, you haven’t been able to buy the Razer Core… until now.

Razer is taking pre-orders for the graphics dock and says it’ll ship in April. In addition to the Razer Blade Stealth, it should work with the new 2016 Razer Blade laptop and other compatible Razer systems with Thunderbolt 3 ports. 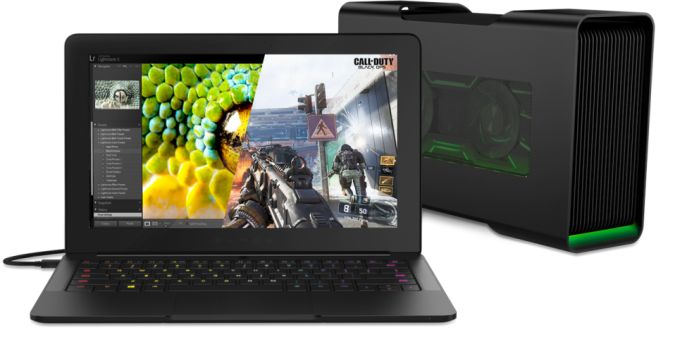 There is one more slight problem. The dock ain’t exactly cheap.

Razer is charging $399 if you buy one with a compatible PC. If you’ve already got a PC you’d like to use the dock with, you’ll have to pay $499 to buy just the Razer Core.

And those prices don’t actually include graphics cards.

The Razer Core connects to your computer via a single Thunderbolt 3/USB-C cable, and adds four full-sized USB 3.0 ports and Gigabit Ethernet.

But it’s key selling point is the double-wide, full-length PCI-Express x16 slot for AMD or NVIDIA graphics cards. You’ll need to supply your own graphics card, but the 13.4″ x 8.6″ x 4.1″ dock should be able to handle some of the most powerful cards on the market. The Razer Core has a 500 watt power supply and it can support graphics cards that use up to 375 watts.

Note that while Razer only promises that the dock is compatible with its Blade and Blade Stealth laptops, a separate announcement from Intel suggests that it should work with any device featuring a Thunderbolt 3 port… including the upcoming Intel Skull Canyon NUC.