Just days after unveiling the Razer Blade Stealth at CES, Razer is now taking orders for its thin and light gaming laptop.

The Razer Blade Stealth measures about 0.5 inches thick, weighs about 2.75 pounds, and has a 12.5 inch touchscreen display. Under the hood it’s powered by an Intel Core i7-6500U Skylake processor and 8GB of RAM. But what really makes the laptop special is that it’s designed to work with an external graphics dock that allows you to use desktop-style graphics cards with the notebook.

The Razer Core graphics docking station isn’t available for purchase yet, but Razer says you can order the laptop today and it should begin shipping January 29th. 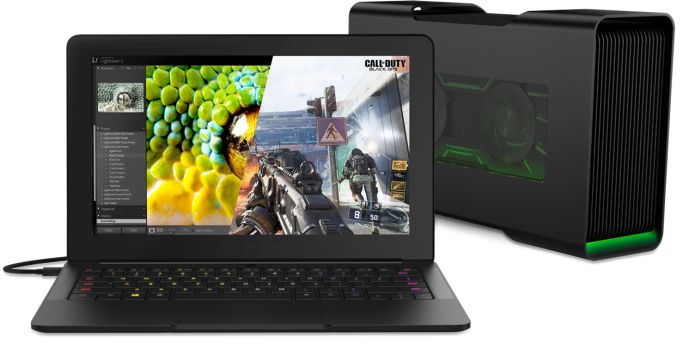 The cheapest configuration is a $1000 model with a 2560 x 1440 pixel QHD display and 128GB solid state drive, but Razer isn’t selling that version yet. You can sign up to be notified when it’s available.

As of January 12th, the most affordable configuration is the $1200 version with a QHD display and a 256GB SSD.

You should be able to play some recent video games using nothing but the built-in graphics. But the upcoming Razer Core graphics dock is really the laptop’s most exciting feature. It’s a large box the size of a reasonably small computer which should support most recent NVIDIA or AMD graphics cards thanks to a single double-wide, full-length PCI-Expres x16 slot.

It connects to the Razer Blade Stealth via a Thunderbolt 3 cable and also adds Gigabit Ethernet, four full-sized USB 3.0 ports, and additional video outputs to the laptop.

The 13.4″ x 8.6″ 4.1″ Razer Core has its own 500 watt power supply and supports graphics cards that use up to 375 watts. It’s clearly not a device for gaming on the go… but it lets you use the same laptop for gaming at home and general-purpose use when you’re traveling.

Razer hasn’t revealed pricing details for the Core yet.