The Raspberry Pi may not be the most powerful computer around, but the little $35 PC is proving to be pretty versatile. It can be used as a Linux-powered computer, a media center, a remote client for logging into a Windows PC, or even as a laptop.

Now one developer has turned his Raspberry Pi into a classic gaming console. 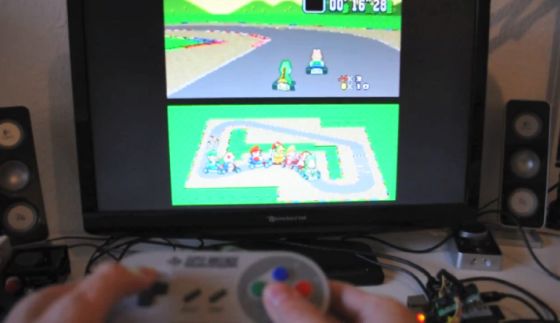 In order to do that, he’s installed Debian Linux and loaded up emulators for classic video game consoles such as the Super Nintendo. So far that doesn’t sound very impressive. Anybody can do that with a few minutes work.

But the next step is a little trickier: building an adapter board that lets you connect real Super Nintento game controllers to the GPIO pins of the Raspberry Pi.

The end result isn’t very pretty, and the developer plans to build a case to house the computer and the game controller board. He also plans to find a launch menu that makes loading the game emulators and choosing games a little easier.

But as you can see in the video below, the Raspberry Pi is more than fast enough to handle video games from the 90s. In fact, it should be able to handle more recent titles as well, but since the 700 MHz Arm11 processor is faster than anything you’ll find in the original Nintendo, Super Nintendo, or similar era hardware, the computer is well suited for games from that era.