Nearly a decade after debuting its first $35 single-board computer, the Raspberry Pi Foundation is launching a new Raspberry Pi Pico that sells for just $4. It’s so small and so cheap that you get one free when you buy a copy of the February 2021 edition of HackSpace magazine.

But the Raspberry Pi Pico isn’t a full-fledged, Linux-friendly general-purpose desktop computer like other Raspberry Pi devices. Instead it’s a small board built around Raspberry Pi’s new RP2040 microcontroller which is a low-power chip designed for low-latency I/O, analog input, and lightweight software.

In a nutshell, it’s designed for applications that need to interact with sensors, motors, lights, or other hardware but which don’t require a complex general-purpose operating system like Linux, which might just slow things down. Of course, the Pico can be paired with a Raspberry Pi or other computer for more complex actions. And the Raspberry Pi Foundation is also making the RP2040 microcontroller available to third-party hardware makers, so there are a number of new boards featuring the chip from companies including Adafruit, Arduino, Pimoroni, and Sparkfun. 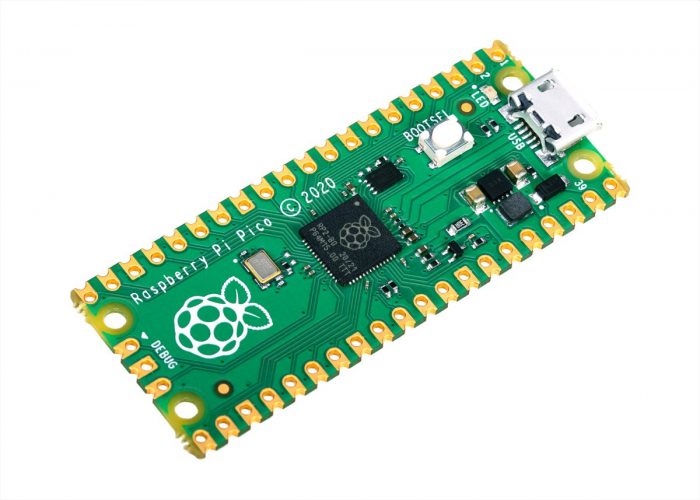 Among other things, the RP2040 chip features a 133 MHz dual-core ARM Cortex-M0+ processor, 264KB of on-chip memory, support for up to 16MB of off-chip flash memory, a DMA controller, 30 GPIO pins (including 4 that support analog inputs), a USB 1.1 controller, and UART, SPI, and I2C controllers (2 each).

The Raspberry Pi Pico board pairs the microcontroller with 2MB of flash memory, 26 exposed GPIO pin, a USB port, LED light, and a power supply chip (with support for 1.8 to 5.5V, enabling support for power sources including AA or lithium-ion batteries).

And if you’d rather pick up an RP2040 board with different features, third-party boards offer features including more flash storage, lights, input and output features, microphones, wireless modules, and motion sensors including gyroscopes, accelerometers, and compass.

Most of those third-party boards should be available for pre-order in the coming weeks, and you can read more about them (and find links) at the Raspberry Pi Blog.