Before smartphones and tablets, and even before Palm Pilot, the Palm Pilot and Apple Newton, HP was experimenting with a different kind of pocket-sized computer: the palmtop PC. In 1991, the company released the HP 95LX, a machine that looked like a tiny laptop computer that shipped with MS-DOS software.

With a 5.37 MHz NEC V20 processor and just 512KB of RAM, it’s a pretty underpowered computer by modern standards. But hardware hacker Rune Kyndal scooped out the guts and replaced them with a Raspberry Pi Zero W and other modern components to bring the HP 95LX into the modern era… or at least its shell. 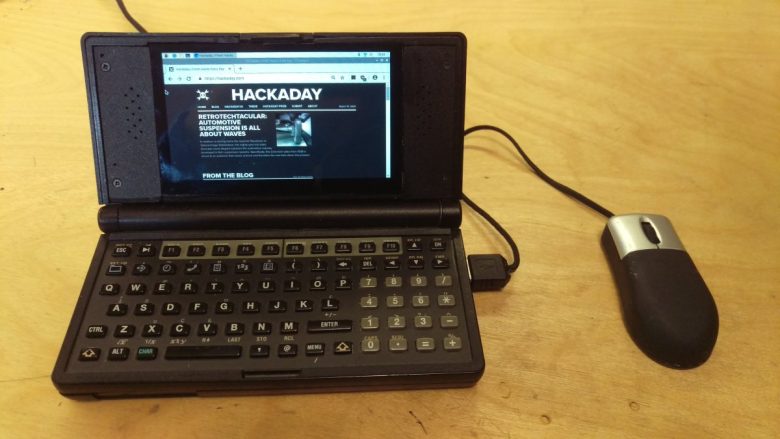 The result is a computer that looks like HP’s classic palmtop on the outside, but which has a 4.3 inch, 800 x 480 pixel backlit color display, stereo speakers, 10/100 Ethernet, HDMI. USB 2.0 ports, a microSD card reader, and a LiPo battery and micro USB port for charging.

Of course MS-DOS has limited use in 2021, so this HP 95LX runs Linux… but since the keyboard has an unusual layout, many of the buttons had to be remapped in software. More challenging is getting the keyboard to work with the Raspberry Pi at all, which was accomplished with an Arduino MEGA microcontroller board which could serve as an interface between the keyboard and the single-board computer.

The project, which was written up by HackADay this week, is actually over a year old at this point, so it’s unclear if Rune Kyndal has made any progress on a few stated goals including hooking up the display’s touchscreen to the Raspberry Pi Zero W or adding a webcam.

Of course, folks who want a handheld Linux mini-laptop that doesn’t involve gutting a 30-year-old PC, have a few other options these days. You could pick up a PinePhone for $150 to $200 and next month you should be able to pick up the optional keyboard accessory for $50.

Alternately, you could check out the F(x)tec Pro 1-X smartphone with a slide-out keyboard and support for Ubuntu Touch or the Linux-compatible Gemini PDA or Cosmo Communicator from Planet Computers.