BIGTREETECH’s Raspberry Pad 5 is a carrier board for the Raspberry Pi Compute Module 4 that gives the tiny computer a 5 inch touchscreen display, Ethernet, HDMI, and USB ports, and a microSD card reader.

Available now for $99, BIGTREEETECH positions the Raspberry Pad 5 as a solution that can be used as a 3D printer controller, smart display, digital photo frame, or smart home accessory. Basically it turns Raspberry Pi’s latest compute module into a full-fledged touchscreen computer. 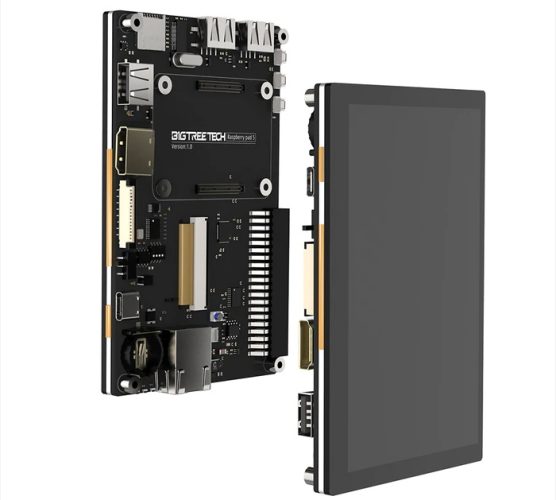 I’d be tempted to call it a tablet, but the lack of a built-in battery means you’d need to bring along a power bank if you wanted to use the Raspberry Pad 5 + CM4 as a mobile device.

Note that the $99 price tag doesn’t include a Raspberry Pi Compute Module. BIGTREETECH does sell kits that come with the compute module for $209 and up though if you don’t feel like sourcing the module elsewhere.

The Raspberry Pi Compute Module 4 is a tiny computer with the same quad-core ARM Cortex-A72 processor used in the Raspberry Pi 4. But the 2.1″ x 1.5″ Compute Module isn’t designed to be used on its own – you need to connect it to another board to get features like USB, video out, or power input.