The Radxa Taco is a carrier board that lets you turn a Raspberry Pi Compute Module 4 into a network attached storage system. It should also work with Raspberry Pi CM4-compatible systems like the Radxa CM3, which is helpful at a time when Raspberry Pi hardware can be hard to come by.

While the compute module acts as the brains of the operation, the Taco adds connectors for up to 5 hard drives or SSDs, an M.2 slot for a PCIe SSD, USB and Ethernet ports, and a connector that can be used for wireless or AI accelerator modules. 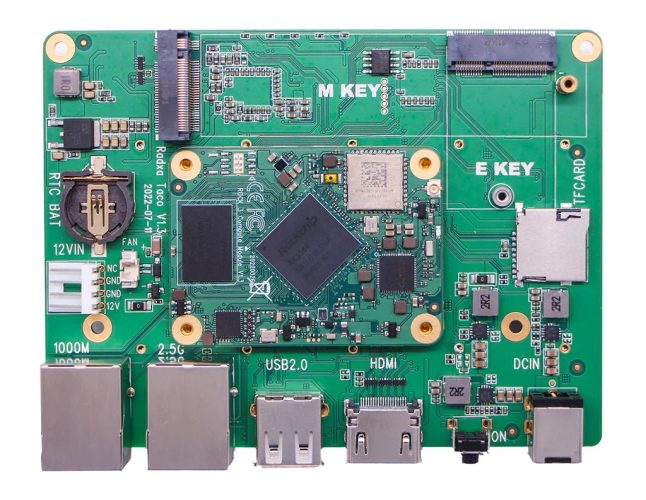 First unveiled last year, the Radxa Taco has been hard to come by. But now it’s available for purchase from Allnet China for $95. And if you don’t like the idea of exposing all of your storage and networking gear to dust and other environmental irritants, CNX Software reports that Allnet is also working on an enclosure for the Taco.

One one side of the board there are 5 SATA interfaces that can be used for 2.5 inch hard drives or SSDs that are up to 15mm thick. You can also connect 3.5 inch drives, but you’ll need to use a cable as they won’t fit atop the board itself.

On the other side you’ll find an M.2 2280 socket for PCIe NVMe storage, an M.2 E Key that can be used for a WiFi card or Google Coral AI module, the connector for a Raspberry Pi CM4 or compatible compute module and a set of ports that includes:

There are also a set of activity LED lights, a Maskrom key, an ATX power supply connector, a DC power input jack, a fan connector, and a spot for a CR1225 RTC battery.