The Radxa Rock 3A is a credit-card-sided single-board computer with a 2 GHz Rockchip RK3568 quad-core ARM Cortex-A55 processor, Mali-G52 graphics, and a neural processing unit.

It looks a bit like a Raspberry Pi and has some similar features including a 40-pin GPIO header and USB and Ethernet ports. But Radxa’s little computer stands out in a few ways. It support san optional eMMC storage module. And it has two M.2 keys – one for wireless cards and another for PCIe NVMe solid state storage. 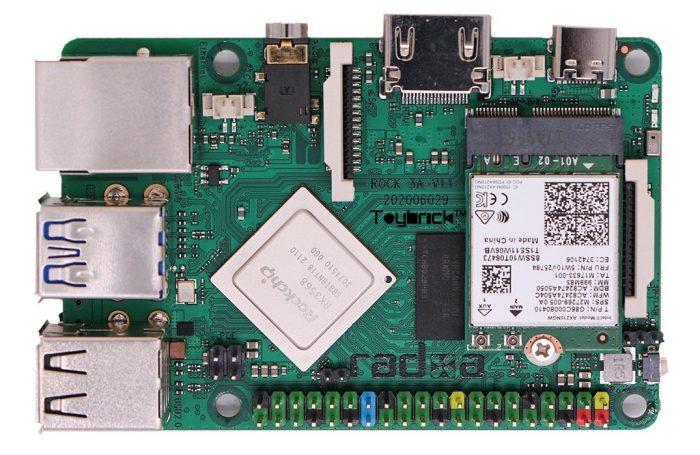 Radxa says the Rock 3A will be available for purchase starting in August, with prices ranging from $35 for a model with 2GB of RAM to $75 for an 8GB model.

All models will have the same basic features set including:

The system can also be configured to support SATA storage by using a breakout cable connected to the two USB 3.0 ports.

Radxa says the Rock 3A will support the Debian 10 Linux for Rockchip-powered devices that’s maintained by the Toybrick team, but it’s likely that other operating systems will be ported to the platform as well.

5 replies on “Radxa ROCK 3A is a Raspberry Pi-sized computer with an M.2 slot for NVMe SSD”