The Google Play Store makes it easy to find, download and install Android apps… assuming you have an Android device with the Play Store installed.

But if you’re running a device that doesn’t have the Play Store or just want to download installable Android apps you may need another way to download apps which you can then sideload.

Developer onyxbits has a tool that lets you do just that. It’s called Raccoon and it’s a desktop client for Google Play which lets you search the Play Store and download Android APK installer files to your desktop. 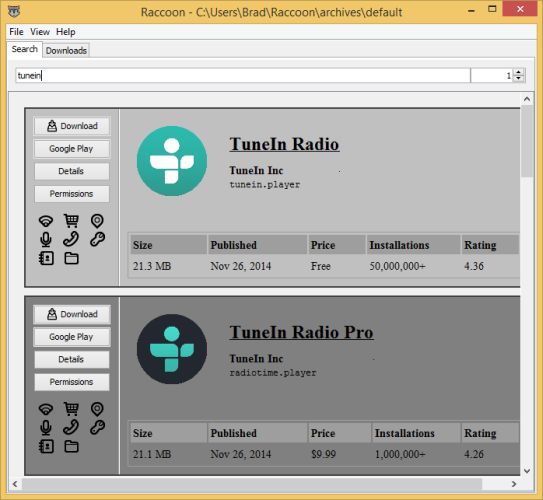 You can use Raccoon to download files so that you can sideload them your device or just store them on your PC for safe keeping. This can also come in handy if you want to store backups of the apps you load on your device in case you’re unhappy with future updates.

Raccoon identifies itself to Google as an Android device, and the starting with the recently released Raccoon v3.3, the software tells Google that it’s a device running Android 5.0 Lollipop, allowing you to download apps that are compatible with the latest version of Google’s mobile operating system.

You’ll need to enter your Google username and password, but if you’re uncomfortable doing that with a third-party app, there’s nothing stopping you from creating a new Google account just for use with Raccoon. The source code for Raccoon is also available at Github, so you can inspect the code to make sure it’s not doing anything shady with your account information.

More information about Raccoon is also available at the xda-developers forum.