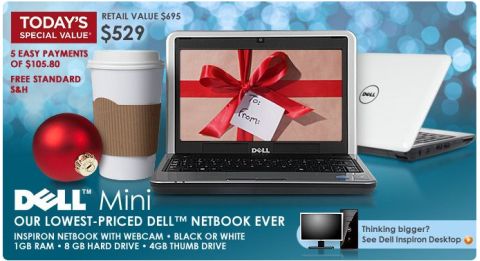 How much would you expect to pay for a 9 inch netbook with a 1.6GHz Intel Atom CPU, 1024 x 600 pixel display, an 8GB solid state disk, 1GB of RAM, and Windows XP? A thousand dollars? Two thousand? Two hundred? If you guessed $529, you’ve obviously been watching the QVC home shopping channel. Because that’s how much the company is asking for a Dell Inspiron Mini 9 with those specs.

If you visit the Dell web site and customize your order to include exactly the same options, you’ll wind up paying $449.

Basically if you start with the cheapest Dell Inspiron Mini 9 with Windows XP, you get a model with an 8GB SSD and 512MB of RAM for $399. An extra $50 will get you 1GB of RAM and a 1.3MP webcam, which are both included in the QVC model. QVC does throw in a 4GB USB flash drive with Corel Paint Shop Pro preloaded. But that really doesn’t seem like it’s worth the extra $80.

QVC says the units will ship by December 1st and the company’s accepting “no hassle” gift returns through January 31st. So I guess that’s a plus.

Update: As Netbook Reports points out, if you add the 15-month McAfee Security subscription during checkout at Dell.com, the total price does come up to $528. But you can get pretty decent antivirus protection using free software like AVG Free or Avast!.

I’ll admit, I accidentally left the McAfee subscription out of my calculation. But I also think it’s a waste of money to spend $528 on antivirus software for a $449 computer. So I’ll stand by my statement that QVC is overcharging by bundling software you don’t necessarily need. You know, just like Dell and other computer makers do. But especially disturbing is QVC’s instistance that this is a package with a “retail value” of $695, when you can build your own computer with identical specs at Dell.com for the same price or less.