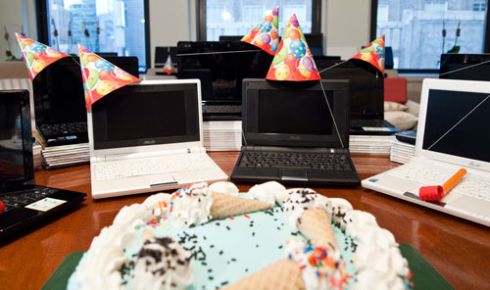 Here are a few interesting tidbits found on the web today:

The other day the blogosphere was aflutter with the news that OS X 10.6.2 seemed to kill support for the Intel Atom processor, which would mean that virtually every netbook on the market would be unable to run the upcoming version of Apple’s Snow Leopard operating system. Well, it turns out that the latest developer build brings back Atom support, so the crisis appears to be averted… or maybe it never really existed. Either way, this is good news.

I probably would have missed this one if Laptop Magazine didn’t remind me, but it was just over two years ago that Asus introduce the Eee PC 701, which was the first consumer-oriented netbook. I picked one up on day one and have never looked back.

At the time nobody was calling it a netbook. It was just a little computer with a 7 inch screen and a sub-$400 price tag. Two years later there are literally hundreds of tiny computers with 7 to 12 inch displays and low price tags that are in many ways direct descendants.

Those crazy kids at Laptop Magazine decided to throw a birthday party, complete with cake and party hates, just like they did last year.

And just for nostalgia’s sake, I’ll post my original unboxing video of the Eee PC 701 after the break. It’s the first unboxing video I ever posted to YouTube, and it also features the first cameo appearance from Laney the cat.