Ever wish your Android phone had a few more hardware buttons so you could tap a button to skip to the next song, answer a call, or launch an app without unlocking your screen first?

QuickClick is an app that lets you do those things and more using just your volume buttons. Of course most phones only have 2 volume keys: up and down. So QuickClick lets you assign different functions to a series of taps. 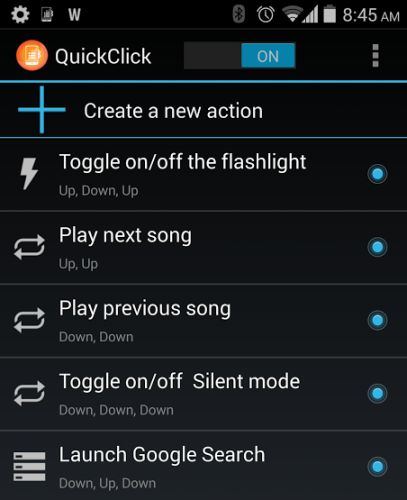 For example, you can toggle the flashlight by pressing volume up, volume down, volume up in rapid succession. Or you could skip tracks in a music player with two taps of the up button.

QuickClick is available as a free download from the Google Play Store. It includes ads, but you’ll only see them when using the app to setup your key press combinations. You can remove the ads by spending a few bucks through an in-app purchase for QuickClick Premium.

Available actions include toggling the Flashlight, taking a photo (or adjusting camera settings), starting a voice recording, calling a contact, shooting a video, starting a text message, playing a sound, or launching an app.

If you have Tasker installed, you can also use QuickClick to assign tasks to a key combo.

The app can be a bit finnicky depending on how you’re trying to use it. For example the options to play the next song or previous song work well with Google Play Music, but seem to confuse Shuttle+ music player. And when pressing the volume keys to launch apps or actions, the volume on your device will continue to go up and down at the same time. But it’s still pretty neat to be able to perform basic tasks without taking your phone out of your pocket… even if those are tasks people have been doing with old-fashioned, non-touchscreen MP3 players (and cassette players before them) for years.

Other features include toggling WiFi, Bluetooth, Mobile data, silent mode, vibrate mode, unlocking the screen, or answering or rejecting incoming calls, and the developer says more features are on the way.