Archos is preparing to launch the third generation of tablets in its low-cost Arnova tablet line. The folks at ArcTablet snagged a few pictures of the upcoming devices, as well as a handful of details. 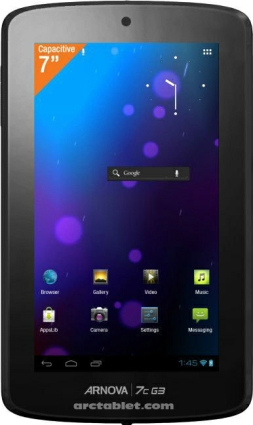 All of the new tablets are designed to run Google Android 4.0 Ice Cream Sandwich, which is the biggest difference between the new Arnova tablet sand the first and second generation models Archos introduced in 2011.

At this point it looks like they’ll all ship with the AppsLib Market instead of the official Google Android Market, but last I heard Archos is hoping to work with Google to make its products Google certified devices, which would allow the company to preinstall the Android Market and other Google applications including Gmail and Google Maps.

The most impressive new tablet is probably the Arnova 7c G3 which features a 1.3 GHz Qualcomm MSM8255 processor, 1GB of RAM, and Android 4.0. Unfortunately it has a low resolution 7 inch, 800 x 480 pixel display and just 4GB of storage space, so this tablet isn’t exactly going to take on the Asus Transformer Pad Infinity in the specs department.

The Arnova 7c G3 has a micro HDMI port, front and rear cameras, and weighs about 0.8 pounds. There’s no word on the price or release date yet.

Archos will also introduce update versions of several other tablets, including 7, 8, 9, and 10 inch models:

The company also has a few other tablets including the Arnova 7d G3 which is basically what you get if you take the Archos Child Pad and paint it black instead of white and don’t bother adding the kid-friendly software.

You can find more details at ArcTablet.