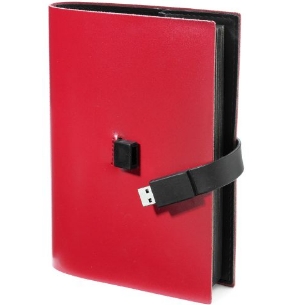 Long before we started calling portable computers notebooks you know what else got use that word? Actual notebooks. You know, the kind that feature paper and some sort of binding. But I have to admit, when I first saw a picture of the Quattro Giga USB Notebook, it took me a moment to figure out where the computer was hiding… until I realized there isn’t one.

Instead, what you see here is a leather notebook cover with a 4GB USB flash drive built into the case. It comes with a 144 page pad of paper, which is replaceable. And the flash drive actually works to help keep the notepad closed.

It’s actually kind of nifty, if somewhat expensive. The Quattro Giga USB Notebook runs $52 at the MoMA Store, although it’s a bit cheaper for museum members. I wouldn’t be surprised if someone makes a much cheaper knockoff version though.