Later this year Intel plans to launch a PC-on-a-stick with an Intel Core M processor. Code-named Cedar City, it’s not expected to launch until the fourth quarter of the year.

But Taiwanese device manufacturer Quanta is already showing off a prototype of a PC stick with a Core M chip. It’s not clear if this is what Cedar City will eventually look like, or even if we’ll ever see a product that looks like the Quanta NH6 prototype. But it does show that at least one company is already working on ways to cram more performance into a tiny computer that you can plug right into the HDMI port of your TV. 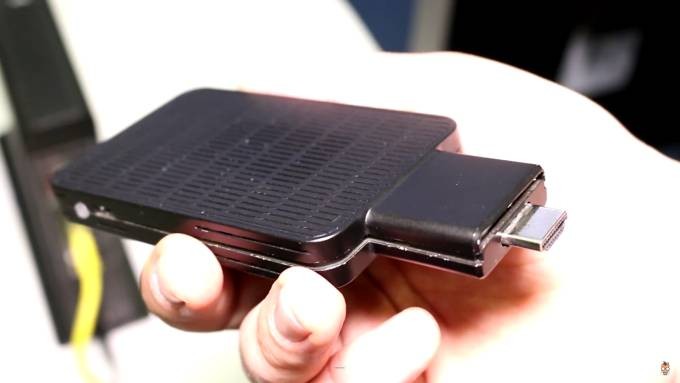 The folks at Mobile Geeks spotted the Quanta NH6 at the Computex show in Taiwan this week.

The device features an HDMI connector, a USB 3.0 port, a USB-C port, and a micro USB port (for power). It also has a microSD card slot.

Under the hood, it’s powered by an Intel Core M-5Y10a dual-core processor with a 4.5 watt TDP, which means it shouldn’t use much more power or generate much more heat than the Atom Z3735F Bay Trail chip used in the first-gen Compute Stick. But the Core M chip offers significantly higher performance for graphics and basic computing tasks.

So why does the Quanta NH6 look so much bigger than a first-gen Compute Stick? It’s possibly because this model is a prototype and that the finished product will be smaller.

It’s also possible that this model could use passive cooling rather than a fan. Mobile Geeks reports there’s a large heat dissipating pad under the hood, and vents along all sides of the case.

We probably won’t know for sure if hardware that ships based on this reference design will be fanless or not until later this year.

Intel’s Compute Stick roadmap suggests the Cedar City model will ship with 4GB of RAM, 64GB of SATA storage (which is faster than the eMMC storage available in current models), 802.11ac WiFi, USB 3.0, and Windows 10 with Bing software. Quanta’s prototype certainly looks like it could offer comparable features.