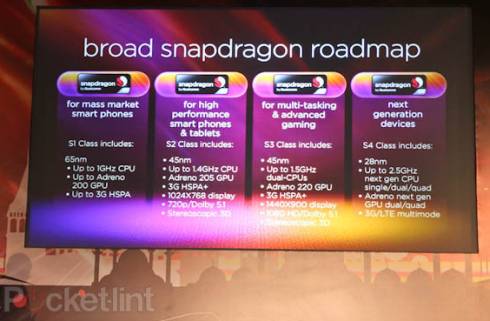 Earlier this year chip-maker Qualcomm announced plans to launch a line of super-fast processors with clock speeds as high as 2.5 GHz. Now the company says those chips will start showing up in smartphones and tablets early next year.

Pocket Lint reports that new chips will come in single, dual, and quad-core versions, with the high-end processors featuring next-generation Adreno graphics, support 3D graphics and 1080p HD video playback, and for 3G and 4G wireless connectivity. The new chips will be built with a 28nm design.

According to Qualcomm’s new naming convention for processors, these new 2.5 GHz chips will be S4 class processors. The company also plans to offer less powerful S1, S2, and S3 chips for lower end phones and tablets where bleeding edge performance isn’t quite as important.