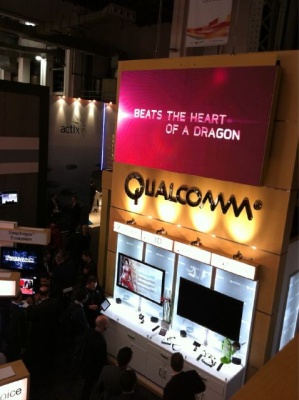 You know how last year the Qualcomm Snapdragon chip was all the rage with phone makers thanks to its super speedy 1 GHz clock speed and decent graphics performance? This year it seems like NVIDIA’s Tegra 2 chip has been grabbing all the headlines thanks to its 1 GHz dual core architecture and higher performance graphics. Now Qualcomm is hoping to recapture a bit of the excitement with its next-generation chips.

Today Qualcomm announced that it’s new line of processors, code-named Krait, will support quad core chips with speeds up to 2.5 GHz per core. That will allow the chips to be as much as 150 percent faster than today’s chips, while offering 65 percent lower power consumption.

Single and dual core versions of the new chips will also be available. All three versions will support next-generation Adreno graphics with up to four 3D cores. Qualcomm says the Adreno 320 quad-core GPU will be as much as 15 times more powerful than the first generation of Adreno products.

The Qualcomm Snapdragon MSM8930 will be the single core chip, while the dual core version is calle dthe MSM8960. The quad core variant gets a whole different naming convention and will be called the Snapdragon APQ8064.

All the chips in the family will support WiFi, Bluetooth, GPS, and FM radio as well as stereoscopic 3D photo and video capture and playback and Near Field Communication (NFC) features.

The chips will likely show up in smartphones, tablets, and other mobile devices.