Qualcomm is best known for making the processors that power many phones and tablets. But for the past few years the company has also been trying to bring its Mirasol display technology to market in eReaders and other devices. It hasn’t really caught on.

But that could change if Qualcomm’s new Toq smartwatch is a hit. That’s because unlike like the Samsung Galaxy Gear, the Toq has a low-power screen that’s easy to view in direct sunlight.

The company says you should be able to get up to 3 to 5 days of battery life, while Galaxy Gear users will have to charge their wristwatches every night. 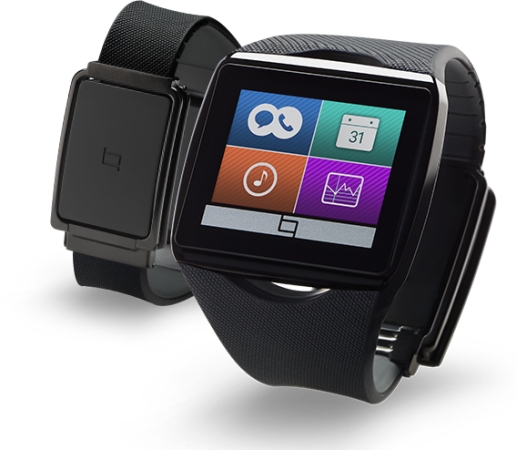 The Mirasol display is backlit and supports colors, but it’s also visible in direct sunlight or other bright conditions with little or no backlight. That allows the screen to use far less power than a typical LCD or AMOLED screen… although the colors won’t look as vibrant on this watch when you’re not sunbathing.

When you do need to recharge the watch, you can do it without wires. The watch’s case includes an inductive charging pad.

The watch is buttonless, and features touchscreen controls. There’s also a Bluetooth headset.

You’ll be able to pair it with Android or iOS phones and tablets over WiFi or Bluetooth and use a companion app to let you view and respond to text messages, emails, and other notifications using your watch. Other apps for the watch include a calendar, weather app, and stock tracker.

Qualcomm hasn’t announced a price or launch date yet, but you can register to get updates by email at the Toq website. The company is calling it a limited edition device though, so don’t expect a huge number of these watches to hit the streets… unless it proves to be so popular that Qualcomm can’t resist making additional batches.

Update: Qualcomm revealed some specs to AnandTech. It looks like the watch is powered by a 200 MHz ARM Cortex-M3 processor, features a 1.55 inch, 288 x 192 pixel Mirasol display, an adjustable band, and support for phones running Android 4.0.3 or later.