Qualcomm’s been working on low-power displays that can be used indoors or outdoors for years. But during a recent earnings call, the company announced that it would move to license the technology to other companies, instead of making Mirasol displays itself.

That doesn’t mean Qualcomm is turning its back on Mirasol entirely, but the company “will directly commercialize only certain” products.”  It’s also not entirely clear whether there any companies chomping at the bit to license the technology. 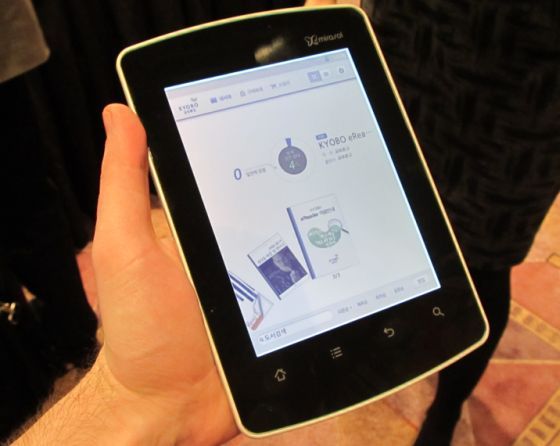 Mirasol color displays can be used with a side-light to look like a traditional LCD. But you can also use ambient light including sunlight to view the screens — much like an E Ink display.

Since the light doesn’t need to be on all the time, devices with Mirasol displays use less power than phones, tablets, or eReaders with most other types of screens.

But the screens are difficult and expensive to make. The first Mirasol displays only went into mass production recently, and only a handful of eReaders in Asia actually use the screens.

The colors also don’t look as bright and vivid as those on LCD, AMOLED, or other screens, and the viewing angles aren’t very good.

Once upon a time, Mirasol technology looked like it was well positioned to help mobile device makers offer products with better battery life and outdoor visibility. But mobile chip makers have done some amazing things with energy efficiency and it’s not uncommon to find tablets which can run for up to 10 hours or longer on a single charge.

As for outdoor visibility, unfortunately today you generally have two options: Get an E Ink device (with a black and white, or washed out color screen), or crank up the brightness all the way and squint.

There are a few other companies working on low-power, outdoor viewable displays.

Pixel Qi produces LCD screens that can be used without a backlight, although they look like black and white displays with the light shut off. While the company has been producing displays for a few years and selling them to device makers in niche industries, there aren’t any major consumer electronics devices shipping with Pixel Qi displays.

It’s not entirely clear what kind of future any of these technologies will have in the consumer electronics marketplace. They all solve the problem of outdoor visibility — but it’s not like consumers aren’t buying existing phones, tablets, and other devices despite the fact that they can be tough to use in direct sunlight.

There are certain niche markets including aviation, military, construction, and other fields where people have to work outdoors where sunlight visibility is important. That’s why small companies such as SOL Computer can continue to charge premium prices for products that can be used outdoors. But I’m not sure I’d hold my breath waiting for the next Kindle, NOOK, iPad, or Nexus tablet to have a low power, sunlight viewable display.

via The Digital Reader and U-T San Diego