Qualcomm’s next flagship smartphone processor will start showing up in 2019, and unsurprisingly it should offer better all-around performance than its predecessors.

But the Qualcomm Snapdragon 855 doesn’t just bring the usual speed and efficiency improvements. It’s also Qualcomm’s first chip with built-in support for 5G wireless networks and with a 4th-gen AI engine that the company says offers a 3X improvement over the Snapdragon 845 when it comes to artificial intelligence.

5G is the next generation of wireless technology which is set to replace 4G LTE. The rollout is expected to begin in earnest in 2019. It’ll probably be a few years before the switch-over is complete, but the goal isn’t just to bring faster speeds. 5G is also designed to offer lower latency, lower power consumption, and more bandwidth/capacity.

The idea is to not only provide technology to get smartphones, laptops, and tablets online… but also smart connected devices including watches, cars, and smart home gadgets, just to name a few examples.

In addition to unveiling the Snapdragon 855 at an event in Hawaii today, Qualcomm revealed a 5G smartphone reference design which looks… like a phone… with a 5G icon in the status bar. 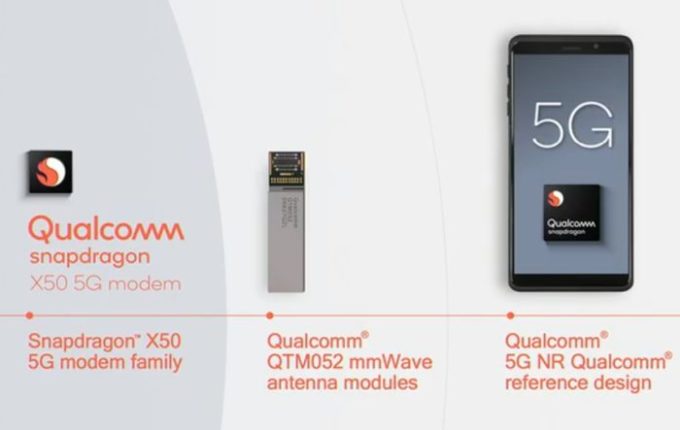 Artificial Intelligence, meanwhile, comes into play for things like computation photography. Qualcomm says it’s built computer vision hardware into the chip, enabling phones to better recognize people and objects they’re looking at. That can be used for things like automatic scene selection, portrait mode, and “Night Sight” features can all benefit from on-device artificial intelligence.

In terms of more traditional specs, the Snapdragon 855 is expected to be a 7nm, octa-core processor with Adreno 640 graphics and a Qualcomm Snapdragon X50 5G modem as well as a Snapdragon X24 LTE modem.

The CPU cores are expected to be arranged in a tri-cluster design:

Qualcomm has also introduced a new ultrasonic sensor for under-display fingerprint sensors. And the company says the new chip is optimized for gaming with improved graphics and audio performance.

Update: Qualcomm had revealed more details about the upcoming chip. The company says it will offer up to a 45 percent performance boost over the Snapdragon 845 in CPU power, up to 20 percent better graphics performance, and up to 3X the AI performance.

It has an ISP that can handle 4K video recording at 60 frames per second.

The to ship with a Snapdragon 855 chip will be the next flagship from OnePlus.

Update 2: Make that one of the first.