Qualcomm has been one of the dominant players in the smartphone and tablet chip space in recent years,  but the company’s latest high-end processor has taken a bit of heat… literally.

Soon Qualcomm will introduce its next-gen powerhouse, but some data about the upcoming Qualcomm Snapdragon 820 processor has leaked a bit early, giving us an idea of what to expect from the successor to the Snapdragon 810. 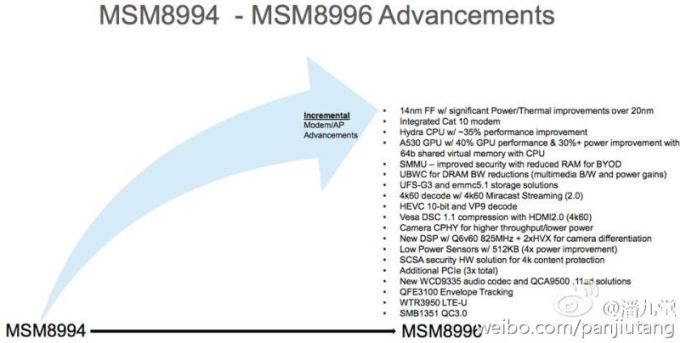 The Snapdragon 810 chip used in phones such as the HTC One M9, Sony Xperia Z4, and ZTE Axon can be pretty fast at times. But it’s also known to overheat, which causes the chip to slow down substantially.

It’s too soon to say whether the Snapdragon 820, (also known as the MSM8996), will suffer from the same heat problems. But here’s what the leaked slides tell us about the processor so far.

It’ll be a 14nm FinFet chip with a Qualcomm Hydra CPU based on ARmv8 64-bit architecture and featuring Adreno 530 graphics.

The new chip could be up to 35 percent faster than the Snapdragon 810, while offering up to 40 percent better graphics. At the same time, it should consume less power, enabling support for longer battery life.

Other features include native support for H.265 and VP9 video decoding at resolutions up to 4K at 60 frames per second, a new audio codec, and a dedicated low-power sensor for always-on features.

The Snapdragon 820 processor is expected to be ready to ship by the fourth quarter of 2015.

A leaked roadmap shows that Qualcomm is also preparing to update its mid-range Snapdragon 400 and 600 series chips around the same time.