But what does that mean in terms of real-world performance? Qualcomm is showing off a couple of tablet reference designs equipped with an early Snapdragon 800 processor, and it’s running a couple of games and graphic demos to show what the future holds for Qualcomm-powered phones and tablets.

The demo system actually has a 1.5 GHz processor, but eventually we’ll see Snapdragon 800 chips with speeds up to 2.3 GHz.

Qualcomm says the processor is 75 percent faster than today’s Snapdragon S4 chip, which is already one of the fastest ARM-based chips around. 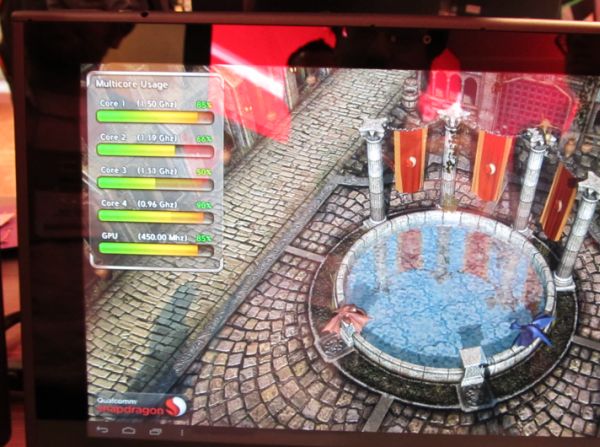 It’s tough to say how the new processor will compare with NVIDIA’s Tegra 4 or upcoming Samsung Exynos chips, since those companies are basing their chips on ARM’s Cortex-A15 design. Qualcomm builds its own custom ARM-based chips, so Krait isn’t a Cortex design at all.

But in the gaming demos, you can see that the reference tablets can render an awful lot of graphical elements simultaneously including lighting effects, camera angles, and more.