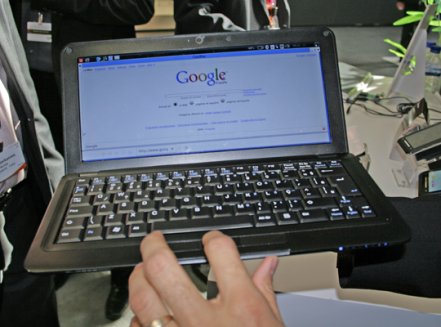 Chip maker Qualcomm has been showing off netbook prototypes built around the company’s Snapdragon chipset for a few months now. Qualcomm’s expertise is in making chips for cellphones, but the new Snapdragon platform should be able to handle basic computing tasks for netbook-style devices, including web browsing and multimedia playback. You won’t be able to run Windows on the chipset, but it should handle Linux or Windows CE quite nicely.

CNET spotted a new Snapdragon-based device at Mobile World Congress, which looks like a clamshell netbook with a rather small display — although that could just be the camera angle. Although the keyboard looks about par for the course for a modern netbook, the long and narrow screen, lack of a full sized touchpad, and prospect of Window CE make this device feel a lot like the HP Jornada 728, which was discontinued years ago. But unlike the Jornada, this device would have a 1GHz CPU that’s capable of supporting modern web browsers, and built in support for WiFi, and possibly 3G wireless connections.