Mobile processors with dual-core or quad-core designs are all the rage these days. But just because you have up to 4 processor cores capable of running at 1.5 GHz or even higher speeds doesn’t mean each core will be running in high gear all the time. 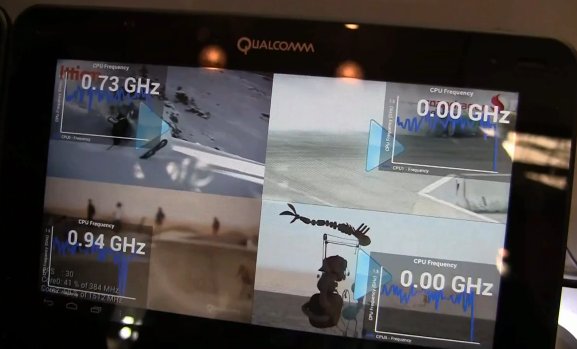 If they did, that would certainly reduce battery life in phones and tablets with quad-core chips. But while demonstrating its upcoming Qualcomm Snapdragon S4 dual and quad-core chips, Qualcomm is showing how devices and software can be configured so that you’re only using the cores you need when you need them.

Netbook News got a hands-on demo showing four videos playing simultaneously on one tablet. Each video was handled by a separate CPU core, and when you paused one video the clock speed for that CPU core effectively dropped to 0 GHz while the others continued to run.

This isn’t unique to Qualcomm’s processors. We’ve seen similar demonstrations from NVIDIA, the first company to bring a quad-core ARM-based processor to market. But it’s still kind of fun to be see a concrete example of how the processors cores in multi-core chips can act independently of one another.

What will be even more interesting is to see how well they can work together to increase performance when running tasks that take advantage of multi-core architecture.