One way to get longer battery life out of a smartphone is to put a bigger battery inside. Another is to come up with ways to charge the battery more quickly so that if you’re going to have to stop to refuel, it’ll only take a few minutes. Smartphone makers have been taking both approaches in recent years… and starting in 2017, there will be another option for fast charging.

Qualcomm’s upcoming Snapdragon 835 processor will be the first to support the company’s Quick Charge 4 technology, which Qualcomm says is up to 20 percent faster and up to 30 percent more efficient than Quick Charge 3.0. 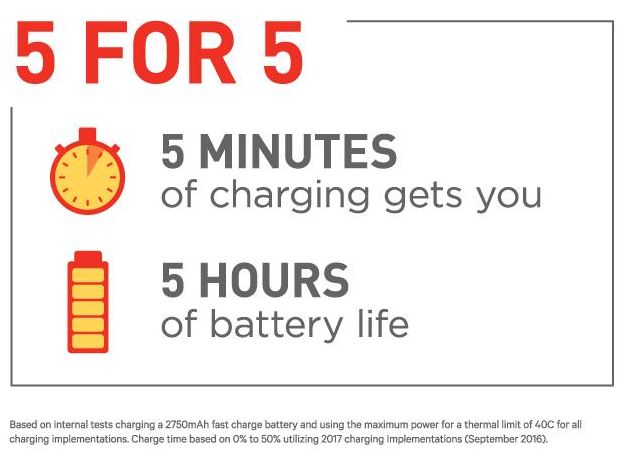 According to Qualcomm, Quick Charge 4 can provide:

Of course, that’ll vary depending on the size of your battery, whether you’re using your phone as it charges, and other variables. And you’ll need to be using a charger that supports Quick Charge 4: just plugging into a standard USB wall charger isn’t going to do it.

It’s also worth keeping in mind that even devices like the 2015 and 2016 Google Nexus and Pixel smartphones can support rapid charging over USB-C without a branded fast charging technology. But Qualcomm says it’s also made changes to its power management technology to deliver even faster charging over the same voltage as well as a “battery saver” feature that should extend the long-term life of a battery.