Qualcomm has unveiled the next generation of its quick charging technology which lets you juice up your smartphone or tablet battery in a hurry.

The company says Quick Charge 3.0 will let you charge a typical smartphone battery to 80 percent in about 35 minutes, when starting from a battery that’s pretty much dead. 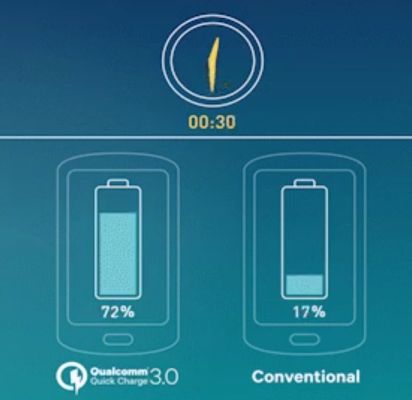 Qualcomm says the new protocol uses an algorithm called Intelligent Negotiation for Optimum Voltage (INOV), which makes the platform up to 38 percent more efficient than Quick Charge 2.0, meaning you waste less power when charging your device. It’s also up to twice as fast as Quick Charge 1.0.

Part of the difference between versions 2.0 and 3.0 of Qualcomm’s Quick Charge technology is that the new version is more flexible, supporting voltages in 200 mV increments between 3.6V and 20V, while Quick Charge 2.0 only supported four different fixed charging voltages (5V, 9V, 12V, and 20V. This means your phone or tablet won’t use more energy than it needs to charge a battery.

The company says it’s also taken steps to reduce the impact of quick charging on the lifespan of a battery, hopefully keeping your battery from degrading too much over the time that you own your phone or tablet.

Some of the first devices to support Quick Charge 3.0 will be products with Qualcomm Snapdragon 820, 620, 618, 617, and 430 chips — although Qualcomm says Quick Charge 3.0 is “an option,” which suggests that some phones with those processors may not support quick charging. It’ll be up to device makers to decide whether to implement the technology.