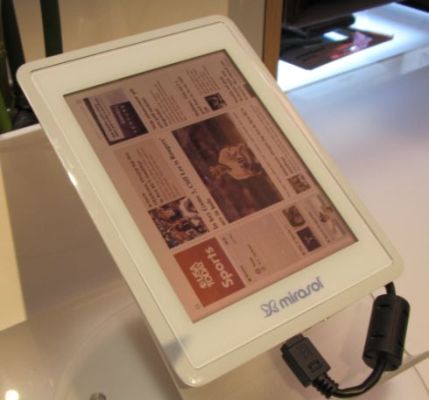 Qualcomm has been showing off its Mirasol display technology for the last few years. The low power screens don’t require a backlight, instead relying on ambient lighting like an E Ink screen. That reduces power consumption and makes it possible to view the screens in direct sunlight. But unlike most E Ink displays, Mirasol screens can handle color and full motion video.

Unfortunately the colors currently tend to look pretty washed out and the screens aren’t very bright. While that might be good enough for a dedicated eBook reader, you’re not going to want this sort of a display in a tablet that you use to look at pictures, play games, or watch videos.

But Qualcomm CEO Paul Jacobs says the company has brighter screens on the roadmap. Eventually the company sees its Mirasol display technology competing with the full color OLED displays used in the latest smartphones and tablets.

OLED screens use more power than Qualcomm’s displays. In fact, the screen probably drains more power than any other component on most modern smartphones and tablets, so if Qualcomm really can improve its display brightness without dramatically increasing power consumption, the company could be on to something.

As for the eReader space, Jacobs says the company’s already scrapped plans for the first version of a Mirasol display for eReaders since he wasn’t happy with it. That doesn’t mean we won’t eventually see dedicated eReaders with Mirasol screens, but it sounds like the company has bigger plans for the technology.