The first Windows-on-ARM laptops basically shipped with a smartphone processor and offered underwhelming performance. But Qualcomm has been working on chips designed specifically for PCs that balance power consumption, performance, and connectivity.

Last year the company unveiled the Snapdragon 8cx processor which is a 7 watt, octa-core processor that the company says is competitive with Intel’s 15 watt U-series chips… but that’s not something that’s really been put to the test yet, since no laptops with Snapdragon 8cx chips have shipped yet (unless you count the Surface Pro X, which features a modified version of the chip called the Microsoft SQ1). 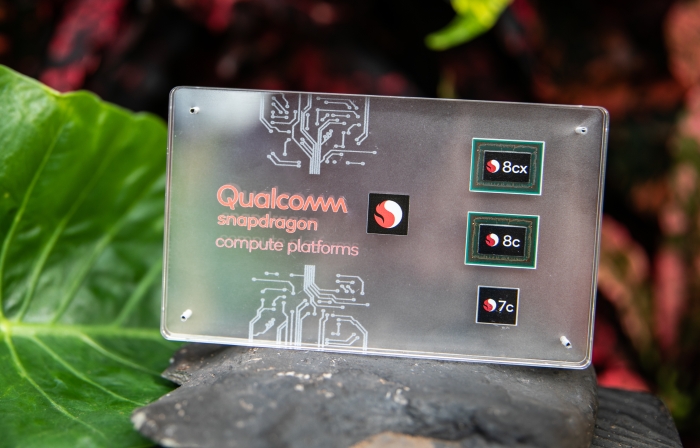 The Qualcomm Snapdragon 8c is an octa-core processor with Kryo 490 CPU cores, Adreno 675 graphics, and a Snapdragon X24 LTE modem with support for peak download speeds up to 2 Gbps. It can also be paired with a Snapdragon X55 modem for 5G connectivity.

While the processor isn’t as powerful as the Snapdragon 8cx, Qualcomm says it does offer up to a 30-percent performance boost over the Snapdragon 850 chip which powers current-gen Windows on Snapdragon mobile devices.

Meanwhile, the Qualcomm Snapdragon 7c is more of an entry-level chip with eight Kryo 468 CPU cores, Adreno 618 graphics, support for 4K HDR playback at 30 frames per second, and a Snapdragon X15 LTE modem with peak download speeds of 800 Mbps.

Both chips are designed for thin, light, and fanless PCs — and Qualcomm is careful to use “PC” in its press materials rather than saying laptop, tablet, or desktop computer. Theoretically these chips could be used in any of those, but the reference designs Qualcomm is showing so far are laptops — including a new reference design for a Snapdragon 8cx Enterprise edition platform with additional security features.