Qualcomm’s new Snapdragon 8+ Gen 1 processor is coming soon to smartphones and other mobile devices, with the company promising up to 10% faster performance than the original Snapdragon 8 Gen 1 and up to 30% lower power consumption. You’ll likely have to wait until this fall to get your hands on a phone with the new chip though.

But it’s also just one of two new chips from Qualcomm. The other is the Snapdragon 7 Gen 1 processor, which will begin showing up in upper mid-range devices from companies including Honor, Oppo, and Xiaomi within the next month or two. 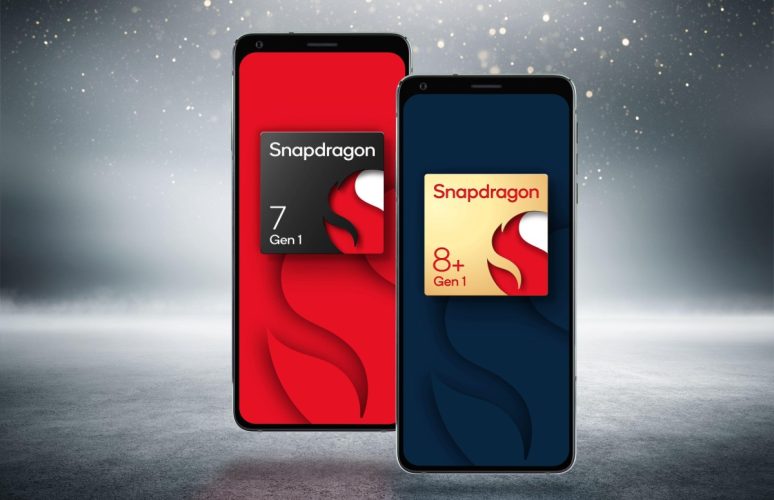 This is the first new mid-range smartphone processor from Qualcomm since the company changed its naming conventions. Goodbye Snapdragon 7xx, hello Snapdragon 7 Gen 1. (For what it’s worth, there have already been two generations of Snapdragon 7c chips aimed at Windows and Chrome OS devices).

The company says the new chip brings up to a 20% boost in graphics performance compared with a Snapdragon 778G 5G chip, and up to a 30% improvement in AI performance. There’s also support for Qualcomm’s new 7th-gen AI Engine with features that include a deep learning face detection algorithm.

As the first Snapdragon 7 series chip with triple image signal processors, the processor supports recording images from up to 3 cameras simultaneously, or images with resolutions up to 200MP from a single camera.

Mobile devices powered by the Snapdragon 7 Gen 1 should begin to arrive by the end of the second quarter of 2022.

The company says that could mean as much as an extra hour of game play one some phones.

Like the non-plus version of the chip, the new processor features a Snapdragon X65 modem with support for peak download speeds up to 10 Gbps, a FastConnect 6900 wireless system for WiFi and Bluetooth (see above for details), and Snapdragon Sight technology for recording 8K HDR video, among other things.

Qualcomm says we can expect to see devices powered by this chip in the third quarter of 2022, including new gaming phones from Asus, Black Shark and RedMagic, as well as more mainstream devices from companies including Honor, iQOO, Lenovo, Motorola, Nubia, OnePlus, Oppo, OSOM, Realme, Redmi, Vivo, Xiaomi, and ZTE.

I guess now we know what chip will be powering the upcoming OSOM OV1 smartphone when it arrives in late 2022.