Qualcomm says its new wireless solution with support for the emerging WiFi 7 standard could arrive in the second half of 2022. The Qualcomm FastConnect 7800 subsystem makes use of new technologies in the latest version of the WiFi standard to deliver peak speeds up to 5.8 Gbps and less than 2 milliseconds of sustained latency.

By comparison, the FastConnect 6900 solution used in Qualcomm’s Snapdragon 8 Gen 1 processors tops out at WiFei 6E with 3.6 Gbps peak data transfer speeds and has around 3ms latency. 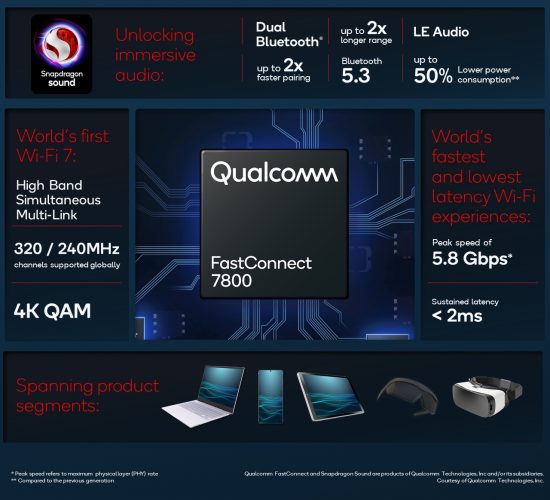 Qualcomm isn’t the first company to jump on the WiFi 7 bandwagon. Rival MediaTek announced last month that it was already testing hardware, but the company also said it didn’t expect to ship anything until 2023.

The Qualcomm FastConnect 7800 system, meanwhile, is already sampling to partners and Qualcomm says you may be able to buy devices featuring the technology in the second half of 2022.

Among other things, Qualcomm’s WiFi 7 implementation leverages High Band Simultaneous Multi-Link technology that can use two WiFi radios at once for four streams of connectivity in the 5 GHz and 6 GHz bands, potentially bringing faster speeds and reduced congestion (thanks to 320 MHz of bandwidth in the 6 GHz spectrum and 240MHz in the 5 GHz band).

FastConnect 7800 also includes includes two Bluetooth radios and support for Bluetooth 5.3. Qualcomm says this allows for Bluetooth connections to work over twice as much range as the company’s previous-gen technology. Pairing with Bluetooth devices is also said to be twice as fast.

With support for two steams, Qualcomm says the system also brings improved audio performance, while making use of Bluetooth Low Energy technology for reduced energy consumption: Qualcomm says its FastConnect 7800 system uses 30% to 50% less power than the FastConnect 6800, which should lead to longer battery life for mobile devices.

Qualcomm says to expect the first device featuring the new Snapdragon Sound technology to arrive in the second half of 2022.