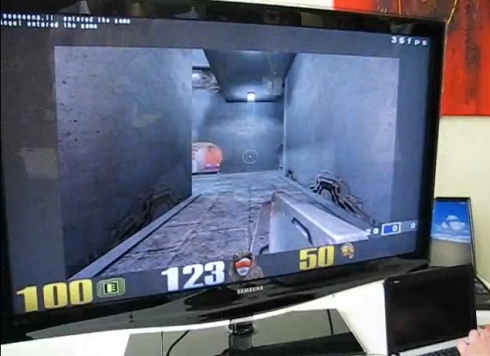 Most netbooks released over the past year have shipped with Intel Atom N270/N280 processors and GMA 950 graphics. But a handful use a different chipset designed to provide longer battery life and enhanced graphics performance. While the Intel Atom Z520/Z530 processors are noticeably more sluggish than their N2xx counterparts, the GMA 500 graphics chipset shows some promise, and some netbooks with this chipset even include HDMI ports to output HD video to an external display.

And things are starting to look even brighter for the GMA 500 chipset. This week at a Mobile Dev Camp event in Germany, Martin Mohring from the Linux Foundation demonstrated several mobile devices playing HD video and graphically intensive video games including Quake III. Probably the most impressive demo showed an MSI Wind U115 with an Atom Z530 processor and GMA 500 graphics running Quake III in HD resolutions on an external display at about 35 frames per second.

For the demo, the netbook was running Moblin Linux. As far as I know, the Windows drivers for this chipset won’t allow this kind of performance.

You can check out a few videos from the event after the break, courtesy of UMPC Portal and Netbook News.de.