I got two separate tips this morning, from the folks at GeekBuying and from South African distributor Reno Botes, who says the new units should be ready to ship by April 7th. 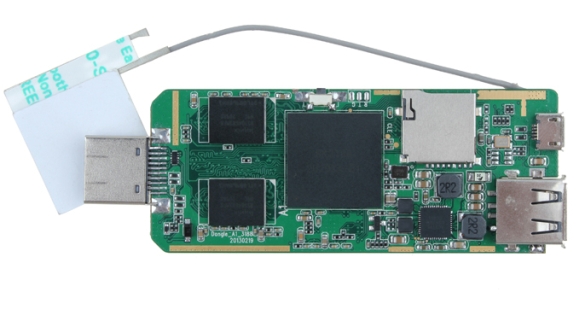 On paper there’s not much difference between the new devices. They’re all mini-computers about the size of chunky USB flash drives. You can plug them into a TV or monitor to run Android apps on a big screen, and hook up a remote control, mouse, keyboard, or video game controller to interact with those apps.

They also all seem to be minor upgrades to existing devices — and if the pictures posted by GeekBuying are anything to go by, at least one model will have a system board that’s virtually identical to what we’ve already seen from the Rikomagic MK802 IV and Tronsmart T428.

This model has the same basic specs as the UG802b, but it has 2 microUSB ports and Bluetooth 3.0. There’s also a hardware reset button.

I haven’t seen many details about this model, but if it’s anything like earlier MK809 models, it will likely have 1 USB port, 1 microUSB port, and a microSD card slot.

Given the similarities between all of these RK3188-powered Android 4.2 TV boxes, I’ll probably stop posting every single new model on this blog soon and only focus on models that actually manage to stand out in some way.

I’m hoping to get my hands on an RK3188-powered device to test soon.