NVIDA’s new Tegra K1 processor may be one of the fastest ARM-based chips around, but last year’s Tegra 4 isn’t exactly sluggish. That’s the chip that powers the HP Slatebook 14, the NVIDIA Tegra Note 7, and the ZTE FunBox game console, among other things.

Now French tablet maker Qooq is turning to the Tegra 4 for its latest tablet designed for use in the kitchen. 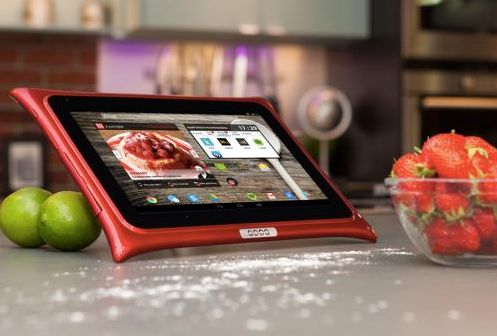 The Qooq v3 is an Android tablet with a shock and splash-resistant case. You can use it to look up recipes or watch instructional videos in the kitchen and if you splash tomato sauce on the screen you can simply wipe it off with a sponge.

It also has front and rear cameras if you want to shoot photos of your culinary adventures or make video calls while you cook.

The tablet isn’t particularly cheap. It sells for 399 Euros, which is about $500 US. But it’s a purpose-built device that comes with access to Qoow’s library of recipes and cooking techniques.