Another day, another modular smartphone. Oh no wait, phones with modular components that are easy to replace or upgrade are still pretty rare.

Google’s Project Ara is an effort to develop a modular phone platform. The Fairphone 2 will feature modular design. And now Finnish startup Circular Devices has a third option: the PuzzlePhone is a modular phone that should ship in the second half of 2016… if the company can raise funds for the project through a crowdfunding campaign. 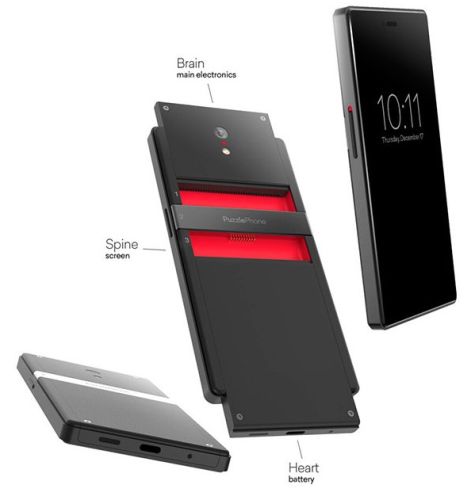 The PuzzlePhone is slightly less ambitious than some of the other projects. There are basically just three modules: a display/case, battery, and well, everything else. PuzzlePhone calls these the brain (electronics), spine (display and frame), and heart (battery).

At launch you’ll be able to buy a complete phone with each component. Want extra battery life? Buy an extra heart or two and swap them out whenever you like. Want to replace a cracked screen? Buy a new Spine.

If PuzzlePhone is successful in building a business around its modular smartphone, we could also see new Brains in the future, allowing you to upgrade the processor, memory, camera, and other hardware without buying an entirely new phone (although really you’re just saving money on the case, screen, and battery).

Circular Devices plans to launch an Indiegogo campaign to raise money for PuzzlePhone production on November 3rd, in hopes of shipping hardware during the third or fourth quarter of 2016.

At this point the company hasn’t revealed the specs for its first phone yet.