Purism has been building and selling computers with free and open source GNU/Linux software for the past few years, and last year the corporation announced plans to build its first smartphone.

When Purism launched a crowdfunding campaign for the upcoming Librem 5 smartphone, the goal was to ship the phone in January, 2019. Now Purism says the Librem 5 is on track to ship early next year… in April.

The delay is due to a bug discovered in the processor Purism plans to use for the phone, which would lead to “extreme battery draining” if it weren’t addressed. 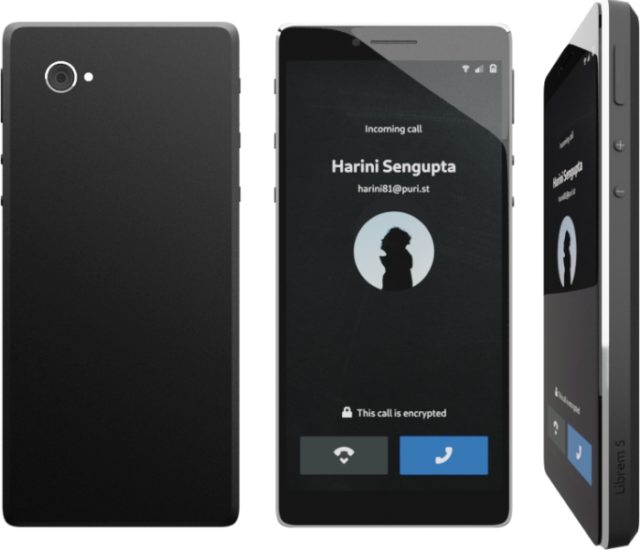 Honestly, I’m not surprised there’s a delay: Purism has had to source the hardware for the phone and develop a custom version of the Linux-based PureOS operating system as well as core apps to run on the phone. What’s actually a bit more surprising is that the developers think they can ship the phone just a few months late.

The Librem 5 will be unlike other smartphones in a few ways. Not only will it run free and open source software based on a modified version of Purism’s desktop Linux operating system, but the developers also place an emphasis on privacy. Most phones let you disable wireless features when you’re not using them, but only through software. The Librem 5 has hardware kill switches that will let you disconnect the camera, microphone, WiFi, Bluetooth, and cellular modem so that there’s no chance of them working in the background without you knowledge.

In addition to an updated timeline, Purism is providing some updated images of the upcoming phone and some more details about the development process.

The Librem 5 will be powered by an NXP i.MX8 64-bit processor, it will run a Free Software Foundation-approved operating system, and a design that isolates the phone’s modem from the processor (because there was no way to source a cellular modem that didn’t include proprietary software components).

The phone is up for pre-order for $599 and it’s expected to feature:

While the phone itself won’t begin shipping to backers until April at the soonest, Purism plans to begin shipping developer kits featuring the NXP i.MX8 processor in October, giving third-party developers the tools they need to create apps that will be able to run on the phones when they ship next year.