Purism launched a crowdfunding campaign to build a premium laptop designed to run free/libre and open source software last year, and the result was the Purism Librem 15.

But some folks wanted a more portable option… and so Purism is back with a campaign to build a 13.3 inch, 3 pound laptop called the Purism Librem 13. You can back the campaign by making a pledge of $1,449 or more at Crowd Supply. 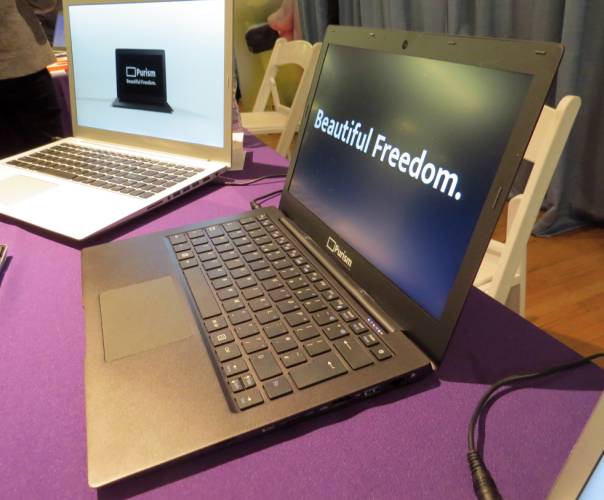 You can pay more for up to 16GB of RAM or for faster solid state storage.

You could also pay a lot less and get a laptop from a traditional PC maker with better specs and just load a GNU/Linux operating system like Ubuntu, Debian, Fedora, or Arch on it.

So why go with a high-priced Purism machine instead?

Founder Todd Weaver says the laptops are designed specifically to run free software and everything but the BIOS is completely free of proprietary binaries, blobs, and whatnot. The CPU, graphics, wireless card, and everything else was selected specifically because it could work with free and open software, which means there’s no code running on the machine that you can’t inspect or modify yourself (except the BIOS, which has proprietary firmware).

Purism is also making the case that it’s PureOS operating system (which is based on Trisquel Linux) should appeal to folks who value privacy and security, since users can examine all the code running on the system and ensure there’s no spyware.

There’s also an optional hardware kill switch which physically disconnects the camera and microphone when they’re not in use, preventing anyone from using your computer’s hardware to listen to you or watch you when you don’t want them to. When you do want to video chat, there’s a 1MP front-facing camera that can shoot 720p video.

Weaver says the Librem 13 should ship to backers of the crowfunding campaign in September if Purism can raise $250,000 to order an initial batch of computers from its manufacturing partner.

If you don’t care that much about using a computer with as many free software components as possible, you could probably save money by picking up a cheaper Windows laptop and even by replacing the OS with a GNU/Linux distribution if you’d like. But Weaver says Purism computers are different because every single piece of hardware has been chosen due to its ability to work with free/libre software.