Not convinced smartwatches from Samsung, LG, Motorola, or Apple are powerful enough for you? The frontman for the Black Eyed Peas has just revealed a new wearable that works as a watch, a fitness tracker, and a smartphone.

Will.i.am’s new device is called the Puls, and it’s a smartwatch with 3G capabilities for making phone calls or connecting to the internet without a phone. It also supports GPS, step counting, and social networking, among other things. 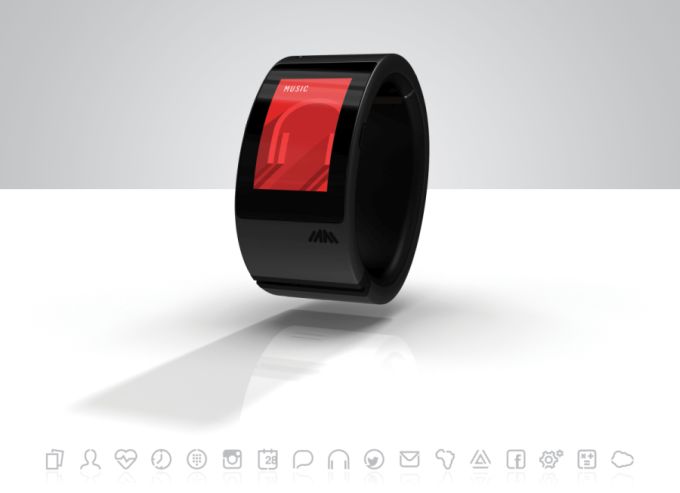 The Puls looks more like a bracelet with a screen than a traditional watch, thanks to its thick band that wraps around your wrist. But that band provides more room for the technology inside the device. The battery and speaker are built into the band.

It’ll come in a range of colors including blue, white, ping, red, and gold… like real gold, with diamonds. In other words, that thick strap is arguably what makes the Puls kind of fashionable.

Under the hood, it’s powered by a Qualcomm Snapdragon processor, 1GB of RAM, and 16GB of storage. The Puls features WiFi and Bluetooth and support for AT&T’s 3G networks.

You can use it to stream music, monitor fitness stats, set alarms, and connect to Instagram, Twitter, Facebook, Salesforce, and other apps. It supports a SIM card which mirrors the card in your phone, allowing you to use the same phone number for both your phone and your smartwatch.

The device actually looks kind of intriguing, and it’s not like there’s already a clear winner in the smartwatch/wristband space. But there’s no word on the price or release date yet, so it’s tough to say how the Puls will stack up against the competition.

The Puls is just one of the first of several wearables from will.i.am’s new company, which is called i.am+. TechCrunch reports others will include a backpack with speakers, shoes with step counters, and a jacket that can serve as a battery pack for the Puls.

via Engadget and TNW

5 replies on “The Puls is a smartwatch… or maybe a wearable phone from will.i.am”