Amazon recently rolled out a new version of Fire OS for its tablets and while Fire OS 5.6 brings a few new features including support for monitoring smart home cameras with Alexa, app icons in the notification tray and some tweaks to the settings menu, it also partially broke one feature: installation of apps from unknown sources.

In other words, if you wanted to download and install an Android APK that didn’t come from the Amazon Appstore, you had to jump through a few extra hoops in November.

Now Amazon has pushed out a new version of Fire OS 5.6, and it seems to fix the bug. 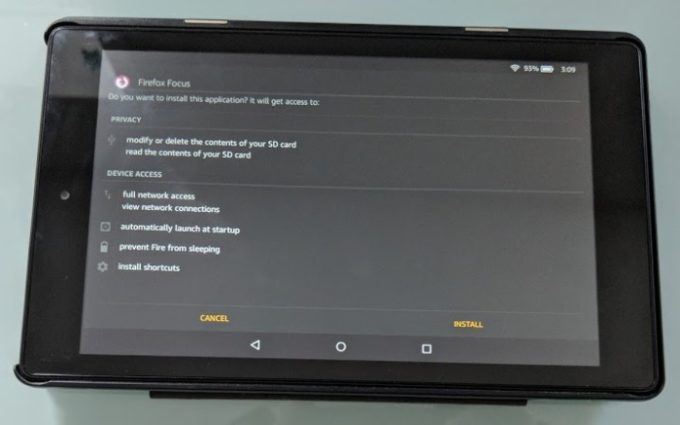 Once the new update is installed, the “install” button shouldn’t be grayed out when you try to install an app downloaded to your device from outside the Amazon Appstore.

While most Fire and Fire HD tablets will likely receive the over the air update automatically, you might be able to move things along more quickly by opening your tablet’s settings, going to Device Options, and then tapping the System Updates option.

If an update was downloaded recently, you can click “update” to install it. If not, you can choose “check now” to search for available updates,

And if you haven’t already enabled installation of apps from unknown sources, you’ll want to go to the tablet’s Security settings and flip the toggle next to “Apps from Unknown Sources.”

Once that’s done, you should be able to download and install third-party apps and even app stores including F-Droid, Humble Bundle, and even the Google Play Store.