The Lenovo Legion Play is a handheld game console with a 7 inch FHD display, built-in game controllers and an emphasis on cloud gaming, although it runs Google’s Android operating system and should be able to support native Android games.

But the Legion Play was never actually released. I found evidence of the console on Lenovo’s website in late 2021, but Lenovo never officially announced the Legion Play and never sold it to customers. It looks like Lenovo did produce some prototypes though, because a small number of them recently went on sale in China… and a handful of folks have begun posting hands-on reports about this little game console that could have been.

Over the weekend YouTuber Taki Udon noted that prototypes were on sale in China for about $160 and that he had purchased one.

Meanwhile YouTuber TESTTRON has also posted two short videos: a first look at the hardware and software and a game play video. Update: Taki Udon has posted an in-depth look at the Legion Play. Check it out if you’ve got a half hour to spare:

It’s powered by a Qualcomm Snapdragon 720G processor, has 4GB of RAM, 64GB of storage, ships with Android 11 software, and weighs 436 grams (about 15 ounces).

It’s unclear why Lenovo decided not to bring the Legion Play to market. As far as I can tell, the company had originally considered introducing it during Mobile World Congress in the summer 2021, but later scrapped those plans.

Maybe the Legion Play wasn’t ready to go. Maybe the company figured there wasn’t enough demand for an Android-based game console designed for cloud gaming. But other companies have come to different conclusions.

Over the past year Razer and Logitech have both launched Android-based handheld cloud gaming consoles. The Logitech G Cloud launched last fall for $300 and the Razer Edge goes on sale later this month for $399. And that’s not to mention the many Android game consoles from companies with less brand recognition.

As for the Legion Play, you’ll probably never get your hands on one. In his Discord channel, Taki says only a limited number of prototypes were available for purchase and it’s likely to sell out soon. But maybe if companies Logitech and Razer see success in this space, Lenovo could dust off the design and launch a model with updated hardware sometime in the future.

Among other things, we learn from Taki Udon that the device was code-named “Zelda,” and that it was apparently pretty close to release, with a near-final prototype made in March, 2021.

Taki Udon says the build quality feels pretty good, but the ergonomics are underwhelming, thanks to some rather sharp edges that can dig into your hands while gripping the device. The buttons and game controllers are nothing to write home about.

As for software, the Legion Play is running a custom version of Android 11 with what appears to o be the same Game Launcher used for the Logitech G Cloud, which is interesting since the two devices also have the same processor. That launcher was developed by Chinese gaming company Tencent, which worked with Logitech on its Android-based cloud gaming handheld, suggesting that after the Lenovo Legion Play was scrapped, Tencent moved on to work with Logitech on a similar device. 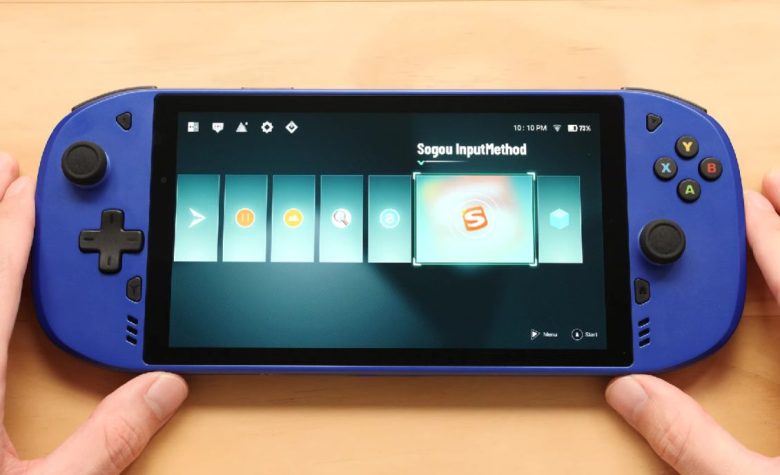 But Taki Udon notes that the Legion Play has at least one feature that the Logitech G Cloud lacks: support for video output over a USB-C connection.

Other software features include a custom Settings app with features including a gamepad calibration utility and support for HDR mode settings. There’s support for light and dark modes in the overall user interface, and you can use a stock AOSP launcher instead of the Game launcher for a more Android tablet-like experience.

Here are some additional videos shared by TESTTRON: