The Proteus Device from XXLSEC is a handheld computer with a 5 inch touchscreen display and a secure, Linux-based operating system called PriveOS.

At first glance, it looks a lot like a smartphone. But the Proteus Device does not have a cellular modem and it’s not designed to make phone calls.

What it does have that you won’t find on most phones, is an Ethernet port. 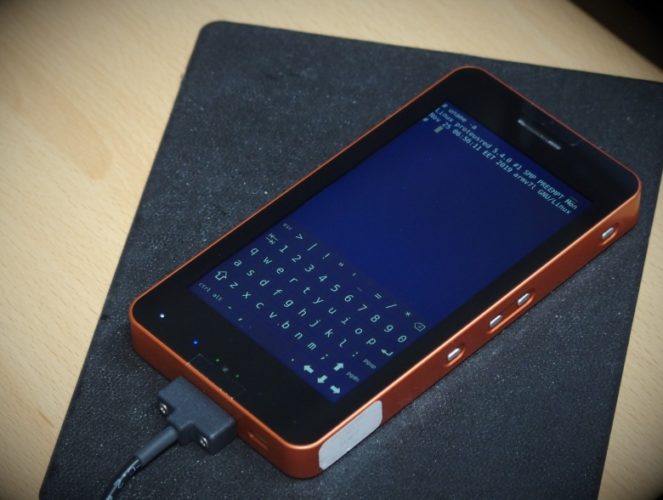 XXLSEC is a company that focuses on security by providing “clean software” with no proprietary binary blobs and “clean hardware” that’s based on “transparent components and design schematics.”

As such, you can find a detailed breakdown of the hardware used in the Proteus Device at github, but here’s an overview:

The handheld computer measures 160mm x 78mm x 15mm and weighs 276 grams. It’s thicker than a typical smartphone, but did I mention that this thing has an Ethernet port?

The Proteus Device has an aluminum body and a set of status LED lights to indicate WiFi activity, Ethernet activity, charging status, and other information at a glance.

Its PriveOS operating system features a Linux 5.4 kernel and it’s said to include security-focused features including encrypted communications tools.

While the hardware is a bit on the slow side when compared to some other handheld Linux devices like the Librem 5 smartphone, the Proteus Device isn’t a phone, so it’s not like there’s really a lot of competition in the space.

There’s no price listed on the XXLSEC website, but apparently the Proteus Device is already available for purchase — you just need to contact the company for a quote. According to a reddit post, the price “depends on project and volume. But it’s not that bad, after all it’s immediately available and hosts some pretty unique supply chain cleanness (made in Finland hardware & kernel), resilience and feature values..”

Update: XXLSEC has added a FAQ to the github page confirming that this Proteus Device is indeed a thing you can buy, although it’s a niche product aimed at developers, and stock is limited and you need to contact the company for pricing and shipping options.

While it ships without any mobile apps, it boots a Linux 5.4 kernl with QT 5.12 and some sample UI apps — it’s aimed at developers and engineers who may want to build their own custom applications.

As for file transfer, it’s true it does not support USB transfers. But you can use WiFi or Ethernet to move files or use the undocumented microSD card holder on the PCB.

The company also makes it clear that this isn’t a consumer device and XXLSEC doesn’t expect to sell millions — if you’re happy installing Linux on your smartphone, then this probably isn’t the device for you anyway.

20 replies on “Proteus Device is a secure, Linux-based handheld (not a smartphone)”