Google can already roll out some new features to Android devices through the Play Store, but updating apps like Google Keyboard, Search, Maps, or Play Services. But major security updates and new operating system features typically require an operating system update — and those are harder for Google to roll out on its own, since it usually needs to work with device makers.

But starting with Android 10, Google will be able to roll out some security updates through the Play Store.

That means you won’t be at the mercy of your device maker and could get some updates on Samsung, LG, or Motorola phones just as soon as they’re available for Pixel devices. 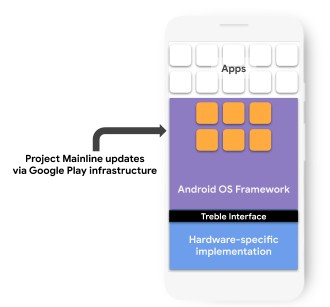 Here’s the idea. There are a series of Android components, or “modules” that can be updated much the same way apps are already updated. You just download the latest version from Google Play in the background and install them automatically. You won’t even need to reboot your phone.

Updates are delivered through the Play Store either as APK files (like other Android apps) or as APEX files, a new file format that’s a lot like an APK, but which is designed to load earlier in the boot process, allowing Android system components to be packaged as easy-to-update APEX files.

Project Mainline will allow Google to push updates to all users as soon as they’re available… assuming they ship with Android Q or later. Phones that ship with an earlier versions of the operating system won’t be compatible, even if they receive an Android Q update. And Google will apparently allow some manufacturers to opt out, although it’s not clear why they would want to do that.

According to The Verge, there will be 14 modules that Google can update at launch, so there will likely be some security updates that still require a full-fledged operating system update. But Project Mainline seems like a pretty good next step toward making non-Google Android devices a little more secure.