The Precursor is a pocket-sized mobile device with a physical keyboard and a small display. But it’s not a smartphone. Instead it’s an open hardware device aimed at developers and enthusiasts looking for a device they have complete control over. Not only is the software open source, but the Precuror is also powered by an FPGA that can be programmed to perform as different types of chips – it’s been tested working as a RISC-V processor.

Developers bunnie Huang and Sean “xobs” cross launched a crowdfunding campaign for the Precursor in 2020, and now units have begun shipping to backers. That’s the good news. The less good news is that if you want a Precursor but haven’t already placed a pre-order, you may be in for a long wait. 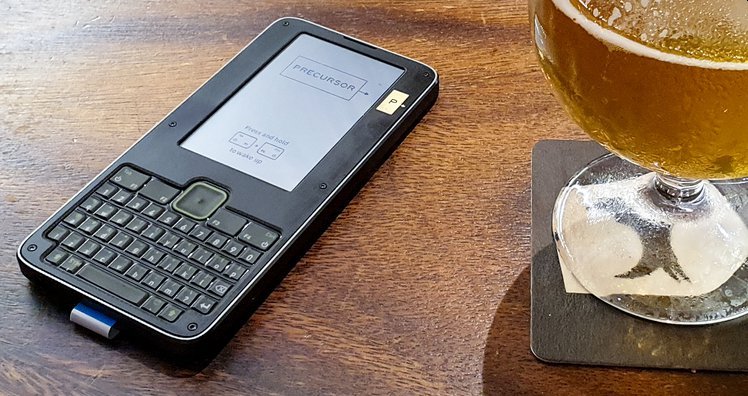 Global supply chain issues have delayed the initial batch by just a few weeks past the latest estimate, with backer units already shipping (and arriving), and pre-orders set to go out within weeks.

But some components required to build more Precursor units may not be available for nearly a year, so Huang says the team won’t be able to produce a second batch until late 2022 at the earliest, and possibly early 2023.

That said, the Precursor is a very niche device aimed at a specific set of enthusiasts who may be willing to wait… especially since it’s not like there’s really any direct competition.

Just got my #precursor delivered. Will be an interesting weekend for sure! pic.twitter.com/aQCGXbQ24q

Here’s a run-down of some of the device’s key features:

The Precursor measures 138 x 69 x 7.2mm (5.4″ x 2.7″ x 0.3″) and weighs 96 grams (3.4 ounces), making it smaller than most modern phones. It’s also designed to be repairable – there’s no adhesive used and you can open the case with a screwdriver. Optional accessories that are already available for order include replacement screens and keyboards, including models with different keyboard layouts.

The device ships with a custom open source operating system called Xous, and the Precursor should be able to get up to 5.5 hours of battery life under active use or 100 hours of standby time.

You can find more details at the Precursor Crowd Supply crowdfunding campaign page.