The DragonBox Pyra is a handheld gaming device aimed at a very specific niche: folks looking for a versatile, open source machine that can run desktop Linux apps and emulate game consoles including the PlayStation 1 and PlayStation Portable and the Nintendo 64 and Gameboy DS.

It’s been in development for a few years, but now you can finally pre-order a DragonBox Pyra… kind of. 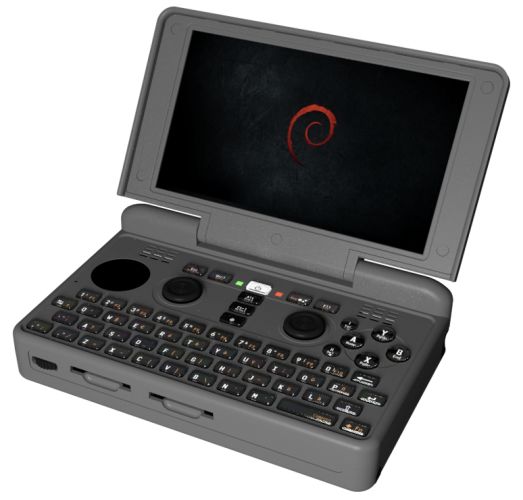 At this point you can spend 290 € (about $330) on a voucher that will be applied to your eventual purchase of a DragonBox Pyra. The final unit will cost more than that, although the exact price hasn’t been determined yet.

Seem like a lot of money? The hardware isn’t all that extravagant, but it costs a lot of money to produce a small batch of devices, and the goal is to mass produce about 200 units at first. It’s not really clear if there’s a large enough potential customer base to produce tens of thousands of units, which would probably be necessary to bring the price down significantly.

Anyway, if money is no object… and if you want to help develop software for the DragonBox Pyra platform, you can pay 1400 € ($1590) for a prototype that will be delivered in November. Only 18 will be made, with 10 going to developers and the rest going to anyone willing to pay the high price.

So what do you get for that price? A little computer with a thumb keyboard, analog stick controllers, gaming buttons, and a series of switches and dials, as well as a flip-up screen.

There’s a micro HDMI port for connecting an external display, and built-in 802.11a/b/g/n WiFi and Bluetooth 4.0 as well as an optional 3G/4G module, although all the cellular module will be included in all of the prototype units.