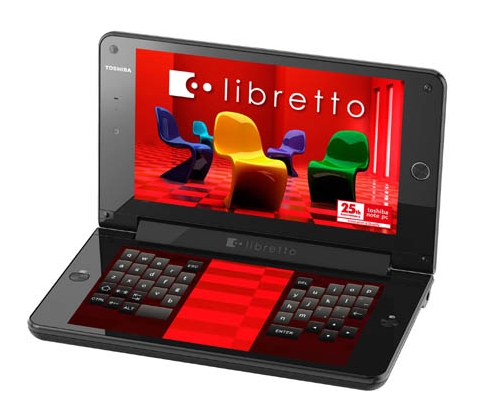 This week Toshiba introduced two unusual new mini-laptops. The Toshiba AC100 is one of the first 10.1 inch mini-laptops to use an NVIDIA Tegra 2 chipset and run Google Android 2.1, while the Toshiba Libretto W100 has two 7 inch touchscreen displays, with one acting as a virtual keyboard. Neither are available in the US yet, but Netbooked notes that you can place pre-orders for both models in Japan.

The Toshiba AC100 is sold under the Toshiba Dynabook AX name in Japan, where it’s going for the equivalent of about $494 US.

I should point out that while the product page for the Dynabook AZ has the words “Windows OS” on it, the web site is actually pointing out that this model doesn’t run Windows, since it instead ships with Google Android. Because it has an ARM-based processor, the only version of Windows it could possibly run would be Windows CE.

Both models are expected to ship in Japan in August.