The LG Wing may be one of the weirdest phones of 2020: it’s a dual-screen phone that doesn’t fold in half like a book, but rather twists to reveal a T-shaped design.

And soon you’ll be able to buy one.

Verizon has announced that the LG Wing goes up for pre-order for $1000 on October 1st, and it will be available starting October 15th. 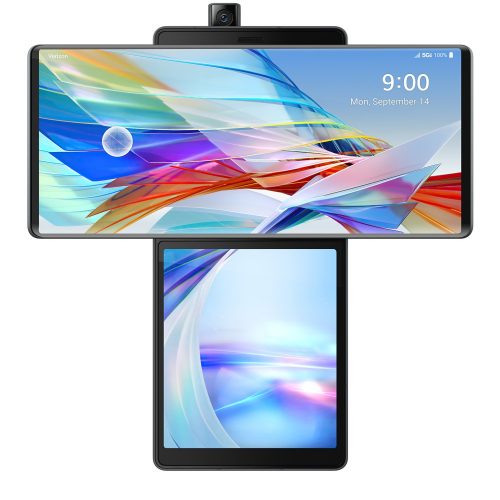 On the back of the phone there are three cameras:

For selfies, there’s a 32MP pop-up camera (F1.9 / 79.6° / 0.8µm) that hides behind the screen until you need it. This is a design that was popular last year, but which seems to be on its way out these days, for better or worse.

It does mean that the front of the phone is nearly all screen. Not only is there no visible camera, but the in-display fingerprint sensor is also hidden.

The second screen is unmistakably the star of the show, allowing you to do things like:

Whether we see third-party developers create apps that take advantage of the unusual dual-screen design will probably depend on how popular the phone becomes. This isn’t the first time LG has tried something new and weird… and the company doesn’t have a great track record with continuing to support those weird features.

The LG G5 smartphone supported optional add-on hardware modules… something the company stopped supporting with the phones it released the following year. And the first view phones the LG V series had a small ticker display above the phone’s primary screen, but the company phased that out after a few years as well.

So it’s a little early to say whether the LG Wing with its swiveling second screen is a gimmick or the start of a trend. But early impressions seem to be fairly positive.