The company introduced the tablet this summer, and now it’s available for pre-order for $300 from the Acer Store, Newegg, and TigerDirect, among other places. 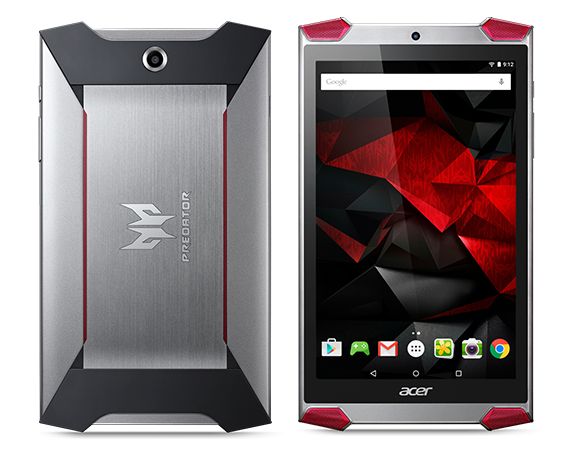 The tablet has 2GB of RAM, 32GB of storage, and a microSD card slot with support for up to 128GB of removable storage. There’s a 5MP camera on the back and a 2MP camera on the front, a micro USB 2.0 port with SlimPort support for video output, and it supports 802.11n WiFI and Bluetooth 4.0.

The Acer Predator 8 weighs about 12.5 ounces and features a 4550 mAh battery that Acer says should be good for up to 8.5 hours of run time. The tablet ships with Android 5.1 Lollipop software.

If you’re wondering what makes this a gaming tablet, Acer is emphasizing the quad speakers, 2×2 MIMO WiFi, and Acer’s Predator TacSense technology for tactile feedback while you’re playing games. The tablet also has one of the most powerful Intel Cherry Trail processors available.

But as an Android tablet, clearly this thing isn’t going to be able to handle Windows PC games (unless you’re using software to stream games from a PC) and the vast majority of Android games are designed to run just fine on phones and tablets with mid-range hardware, which kind of makes me wonder if there’s a market for Android tablets aimed at gamers. And if there is a market, it is already served by the similarly-priced NVIDIA Shield tablet?