Powercast is showing off its wireless charging technology at the Consumer Electronics Show, and unlike Qi and Powermat wireless charging systems, Powercast says it can charge some devices that are as much as 80 feet away from a charger.

At that distance, the company says its currently technology is only good for very low-power devices like thermostats and home automation sensors. But place a set of wireless headphones, a keyboard, mouse, or gamepad a foot or two away from the PowerSpot transmitter overnight and your gear should be charged by morning.

Or at least, that’s what will happen if Powercast manages to find hardware partners willing to implement its wireless charging technology into their gadgets. 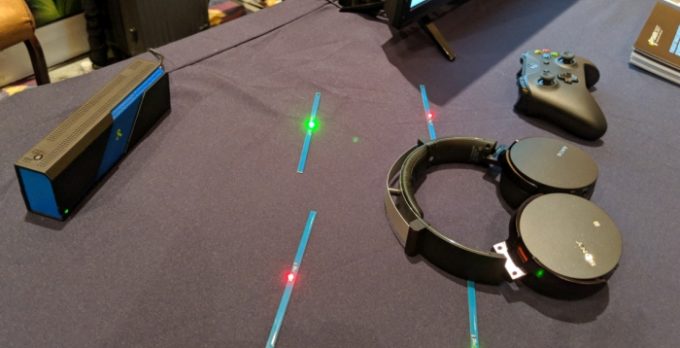 Right now the company is showing off its transmitter with some off-the-shelf products that have been retrofitted to work with Powercast’s wireless charging.

The company hopes to begin shipping its transmitter in the third quarter of 2018, and the goal is to line up hardware partners by then, because a charger isn’t very useful if you can’t actually use it to charge anything.

Powercast has actually been in the wireless charging business for well over a decade, but up until recently the company was focused primarily on industrial products. With the proliferation of small, low-power consumer gadgets like wireless earbuds, mice, and keyboards, the company figured the time was right to try to market a consumer version if its products.

The system doesn’t supply enough power to charge a smartphone, tablet, or laptop at this point, so this is more about finding a convenient way to keep low-power accessories charged without ever having to plug them in. But if the platform catches on, it could pave the way for adoption of higher-power wireless charging-at-a-distance.

Powercast isn’t the only company hoping to bring its wireless charging-at-a-distance technology to market this year. Energous also recently received FCC approval for its own mid-field charging system that can charge gadgets from up to 3 feet away.