The developers of Paranoid Android recently introduced a feature called Halo which completely changes the way that notifications and multitasking works in Android. If you’re running the team’s custom version of Android you can view notifications in a small pop-up window — and you can respond to instant messages, Facebook updates, or other notifications without exiting the app you’re already viewing.

Basically the Paranoid Android team took Facebook’s “chatheads” feature and applied it to any app that features notifications.

Up until now if you’ve wanted to use Halo, you’ve needed to install a custom ROM with the feature built-in. But the Paranoid Android team released the source code and now there’s a free app called Portal which brings Halo-style notifications and multitasking to any Android device. 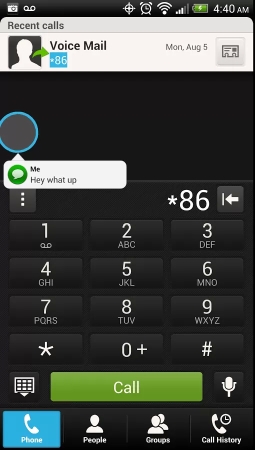 Portal puts a small circle on your screen and shows any notifications in that circle. Tap it to expand and see a list of notes vying for your attention, or move the circle to another part of the screen if it’s in your way.

The app lets you disable notifications from specific apps if you’d rather not see an alert every time it comes in.

Portal doesn’t do that — instead it would open the Messaging app in full-screen mode. But you can quickly dismiss the app and go right back to whatever you were doing.

Overall, Portal is designed to let you see and respond to notifications more quickly than you would if you had to pull down the notification bar. For rapid-fire chats or text messages, it could save a lot of time.

Your results may vary, by the way. I was able to load the app on my HTC One X running CyanogenMod 10.1, but it doesn’t actually show any notifications and I can’t figure out a way to access the settings.

Portal’s available as a free download from the Play Store, at least while in beta.